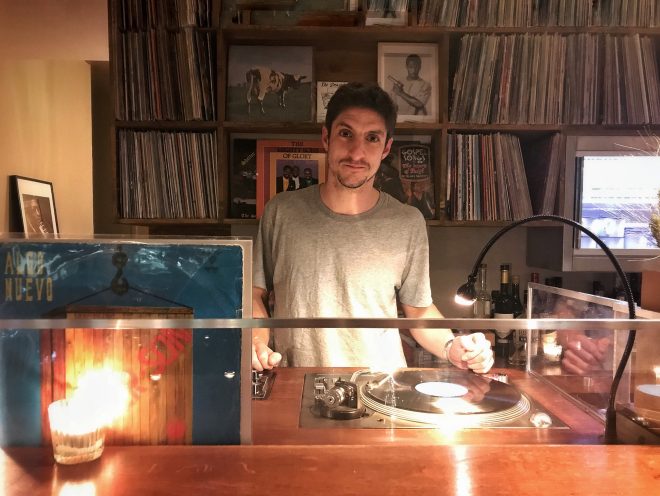 Guillaume Quenza is co-owner of Frequence in Paris. He makes two cocktails for us, one with Whisky and Maraschino and the second with Genever and Suze.

Guillaume introduce yourself
My name is Guillaume Quenza, I am thirty years old from Corsica and I’ve been living in Paris for 5 years. I studied civil engineering and during a semester I worked in a brasserie and soon realised it was more interesting than engineering. Even if it was a brasserie, there was a homemade menu wih homemade syrups and good quality cocktails for a brasserie. But I thought I needed to move to learn more, which lead me to Grazie, then I became head bartender at Beaucoup, then moved to Andy Wahloo, before moving to Sherrybutt for two years. That’s Where i had the most pleasure and learnt the most. Everything is dedicated to bartenders, to make their work easy and I’ve never seen that anywhere else and of course it’s a great team with Javier who is very creative and he knows where he wants to go and Jonathan who has lots of ideas. I had an opportunity to open a bar with two friends, so we did it, but otherwise I would have stayed at Sherrybutt. It took us a long time to find a place, but finally we are here at Frequence.

The bar you dream of
Frequence is the bar of my dreams because it merges music and cocktails and I do it with friends who shared the same vision. For instance, the signature cocktail I’ll make, Suzanne is a good window into what we want to do. It’s easy and everyone can understand it. We are not looking for the ultimate cocktail, just a place where you can have a good time. The first wave of cocktail bars broke the mould by allowing people to drink sharp cocktails out of hotel bars. But now I have the feeling that we are taking a step back with more and more complex expensive cocktails. It’s becoming less accessible to everyone. Our first goal was that people come to listen to the music. Most of our money was spent on the music system (usually in bars, that’s the smallest part of the budget), then the bartender station and we did what we could with the rest. So that’s why the two turntables are at the same level as the bar and we play only LP’s. Instead of a playlist, we have someone taking care of the music, you pay more attention to it and you can ask questions more easily if you want, so it creates other conversations, feelings and you can switch the music in real time regarding the ambiance. That’s why the back bar is made with around 1000 LP’s, even if some are still missing, we are constantly getting more and more. I like the fact that we are in Paris, because I think the cocktail scene is very lively and most of all, there is a real solidarity between the different bars. For instance Mido from Cafe Moderne, the bar just on the other side of the street, was here everyday during the construction works to support us. Amaury my former boss comes here all the time after his shift at Dersou, because he lives near by, and it’s the same with my old team from Sherrybutt.

What do you do in your time off
When I don’t sleep, I am in my bar. It’s like home, so even during my days off I tend to be here.

The spirit you like the most
I love whisky to drink but to work with it would have to be aquavit, because it’s a spirit with a complex taste. It has a strong taste with all the spices, even if you can use it like vodka. I love to work with the Linie aquavit, because I love the story behind it and the taste is very special. You can use it for a reverse so it’s stays low ABV with a kick because of the spices. Here we use the Aalborg Jubileum which is less strong than the Linie but still rounded. And, as I am half swedish, choosing aquavit makes sense.

What makes a good cocktail
A good cocktail is something where you can taste each ingredient in the drink and enjoy the moment. It needs to be long in the mouth and not too complicated. Each component needs to be there for a reason and being understandable to everyone. Sometime bartenders want to make difficult cocktails and the average audience can’t understand the whole concept, which is a pity.

What ingredient do you enjoy using in cocktails
I love Sherry as there are so many to choose from. I prefer the very dry ones, like fino, or oxidative like oloroso, amontillado or palo cortado. I can put a lot of sherry in a cocktail, because it’s soft and not too strong, but has a sharp taste that I like.

Where do you think we need to go to interview another bartender
Go to visit Hugo from Monsieur Antoine, I began working with him in Paris in the brasserie I was talking about. We didn’t take the same road, but recently he just changed his menu and it’s very interesting. He is making old classics, but working on the quality and origin of the ingredients. Otherwise go to L’entrée Des Artistes to meet Jeremie, or Blue Bird which has a cool 70’s vibe.