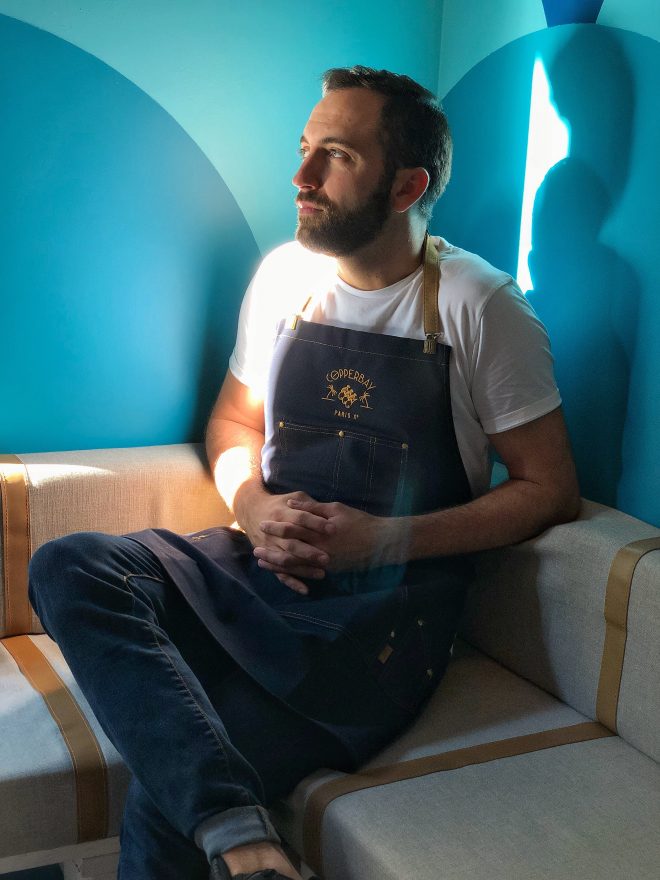 Julien Lopez is the bar manager of CopperBay in Marseille. He makes two cocktails for us, one with Rum and Verjus and the second with Vodka and Balsamic Vinegar.

Julien introduce yourself
My name is Julien Lopez and I originally started my career in computing but after a few years, I was bored because I always had to make the same code and the corporate mindset was not my cup of tea. So I started a summer job at Bambou Bar in the South of France and discovered that I loved the teamwork, the hospitality and working night shifts. I had a Masters in computing so I looked for a degree that offered an equivalent certificate in hospitality. To finish and receive this diploma I needed to complete an internship. Whilst I’d been working at La Paillote Bambou at La Grande Motte in the South of France, I met Sacha Molodskikh an amazing person with a wealth of international experience who really impressed me. He advised me to go to Papa Doble in Montpellier for my internship because he believed it was the best bar at this time in the region. When I graduated, the owner of Papa Doble offered me a full-time job and I worked here for a few years. I read a lot of books, watched videos, went to London to learn from the best, I was passionate about the industry and immersed myself in learning about it. I understood with Julien Escot (the owner of Papa Doble) that London was at another level regarding cocktail culture, which we didn’t have in France at this time. Papa Doble was trendy, we’d just been elected best new opening in France for 2011 and later Best Bar in France but we were still not at the same level compared to London. Julien Escot trusted me and offered me the position of head bartender; which was a challenge. We raised the level of our menu, purchased new equipment, trained staff in stylised service and dressed differently. We created our touch and we were well known for that in France. Julien Escot won the Global Havana contest, I won Abuelo and all our team were winning a lot of competitions. In a few years Papa Doble became an institution and in 2012 we were in the World’s 50 Best Bars list. In 2014, I decided I wanted to open a new place in Paris with my partners Elfi and Aurélie who I knew from the industry… and Copperbay was born. The concept of Copperbay is close to Papa Doble with an emphasis on ingredients and top Palace style service and hospitality. We are the opposite of the speakeasy style, we have big windows and there is a lot of light in the bar. You have more and more places like that in Paris, such as Kouto and Fréquence, Paris is no longer full of bars with the EEC style.
After 4 years, Copperbay is a real success in Paris and as Elfi and I are originally from the South of France, we decided to write a new chapter for Copperbay in Marseille. The idea was to create a copycat of Copperbay Paris’ design because it’s us. Copperbay is about the seaside, so it’s perfect in Marseille. From Paris to Marseille we work exactly the same, we are a family with the same identical menu and that’s our challenge. For the next menu, the two teams will work remotely together to create it, even if we work with local producers, like Ferroni in Marseille and La Distillerie de Paris.

The bar you dream of
Drinks are accessible for everyone at Copperbay, but my dream bar would be a more geeky place in Panama City. As you know my background is computing and I am still in love with technology and innovation. For me, it’s about the combination of science, technology, cuisine and pastry which is interesting. I really like something very experimental like Aviary in Chicago where they work in a real lab in a white coats. Real innovation for a drink, the garnish, the container, it’s all about research. I would like to work with agro-engineers or biologists who could explain at what temperature your plum will exactly merge with your vermouth, that to me is exciting. To really understand the process of clarification (with real carbon, not milk) and understand why flavours work with each other because their molecules work together, (it’s a fact even if it’s weird). For instance, once at Copperbay we mixed banana and cauliflower syrup. It was a failure because people didn’t get it, it was too challenging. But from a scientific perspective it was right. I read a book named Buds and Molecules made by a pastry chef and he demonstrated how it was a perfect match. So the idea of the bar is more scientific and the design would be zen, so the clients can focus on their drink in an organoleptic atmosphere. Even when someone arrives they can smell coffee and drink andesite to reset their sense of smell and taste. Of course, music would be part of the experience, but I have to work on that.

What do you do in your time off
I watch series or enjoy gaming with an online multiplayer game like Fortnite or Counterstrike. A bar is about teamwork, and even when I play it can’t be alone. When I have more time I love to go wakeboarding or drive sports cars. I have one here in Marseille so every quarter I go on a racetrack or karting. I do a lot of different sports too like basketball and football because I’m kind of hyperactive.

The spirit you like the most
My favourite spirit is rum. When I started the bar, rum was the one, as it’s easy to sip and mix in a cocktail, everyone likes rum. Originally I preferred rums on the Spanish side with caramel and vanilla flavours. Now I am more on old Agricole rum or Jamaican rums, which is more rough and less modified like Smith and Cross.

What makes a good cocktail
In my experience, it’s about what your client likes. Because if you talk about balance it’s your own taste or a referential like Jerry Thomas’ book, but that was written more than a hundred years ago. For instance a classic sidecar, today you can’t make a sidecar like that, it’s not sweet enough. The tastes of people have changed, products are not as good, you need to evolve as well and counterbalance that. For instance, at Danico you have innovation for a good reason, not just because it’s trendy. A good cocktail has to match your clients expectations and the venue you work in. In a beach bar, I am not expecting a Manhattan, a Negroni or a Rob Roy, I want long refreshing drinks.

What ingredient do you enjoy using in cocktails
I love sherry. Especially the products from Gonzales Byass. I prefer Pedro Ximenez because I have a sweet tooth, but the aromatic range added in a drink is amazing thanks to sherry. I prefer to add a touch of sherry than use a bitters.

Where do you think we need to go to interview another bartender
You need to go to The Old Man in Hong Kong, it’s been a long time since I’ve been so amazed by a bar. COA was great too, a great concept with a scientific approach to agave. In Paris, Danico they know how to manage their approach to cocktails from A to Z, and I always learn something when I speak with Nico de Soto. In Bordeaux, Symbiose, they know their game. Here in Marseille, Carry Nation is the right place for a speakeasy venue, they’ve really developed their concept from the design to the drinks. Employees Only, it’s just about having a good time, but what more do you need? And finally in Singapore, Native seems very impressive, they’ve made me curious and I want to go there.