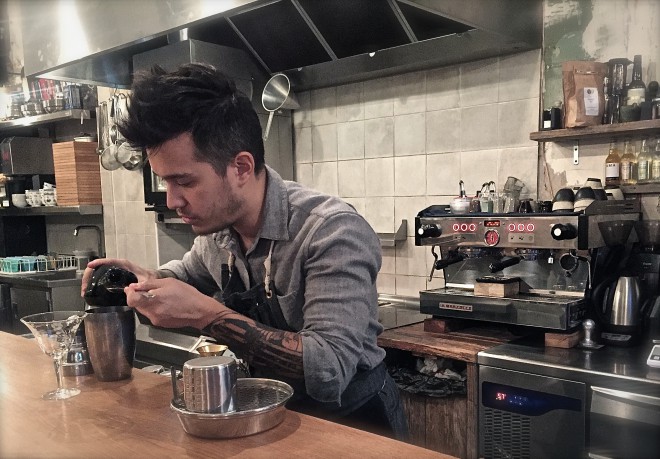 Amaury Guyot is head bartender at Dersou in Paris. Dersou is one of the first restaurants in the world thats tasting menu is paired with a different cocktail for each course and it’s menu (both food and cocktails) changes daily. He makes two cocktails for us, one is with Scotch Whisky and Cynar, and the second is with Gin and chinese pomelo.

Amaury introduce yourself
I’m Amaury Guyot and I’m head bartender at Dersou in Paris. I am 31 years old, born in Morocco and grew up in South of France. Bartending came randomly after my studies. I went to Ireland for 3 years to improve my English and I had the opportunity to work in a hotel, where I discovered the world of hospitality and service. It was in 2007 with the small rebirth of cocktails in Europe and of course in New York City when I became really interested in this industry. I moved to Ibiza for 6 months during the season, then worked in cocktail bars in Australia for 6-7 months, ending this period with a holiday in Japan for few months. I moved back to France in 2011 and went to Paris where I started to work at the Prescription Cocktail Club and the Experimental Cocktail Club group for a year. In 2012 I opened my own bar with Cathleen McGarry, Sherrybutt and one year later I won the Nikka Perfect Serve. I wanted to open a post-industrial New York/Japanese style place where you could find premium cocktails, with pure ice that you carved, a fine selection of whiskies, a place that didn’t exist in Paris at this time. Then I met Taku Sekine, who used to work at Saturne and Clown Bar and we had the idea to set up a restaurant that had a degustation menu with cocktail pairing. In november 2014 we opened Dersou. I was looking for a new challenge and we think we are the only ones with this concept in the world. We wanted to prove we could introduce something different (not just involving a a good chef or bartender) and we began from scratch, so it was risky. Paris was not the best place to launch this project, New York or London would have been easier or faster, but Tak only has a visa for France and Sherrybutt still needed me. At this time a lot of young entrepreneurs were launching new restaurants and bars and as ours was different in the end it made sense. After one year being open we just received the prize Fooding 2016, but there is still work to do and we are constantly finding ways to improve and innovate on a daily basis. In fact, when you work with fresh seasonal products, you have to re-do the menu on a regular basis, especially for the food.

The bar or party you dream of
Exactly the same as where we are. Maybe a bit bigger with twice the staff, so I don’t need to work, I could retire and chill.
I used to go to cocktail bars like Le Syndicat, l’Entrée des artistes ou CopperBay. But now I tend to go to more restaurants to have good simple food with a mix of fusion and classic.

The spirit you like the most
For cocktails, right now I prefer to work with Genever. White alcohol, cereal, juniper notes without too much citrus or flower flavours like gin. Even if it’s a good base you need to really work on it to get the best from it. And I prefer Light Geneva or Oud Genever than the Blue Genever which is stronger.

What makes a good cocktail and which product do you want to highlight at this moment
A good cocktail for me is about balance, but I also like a good surprise. When you read a menu and you don’t really know how it’s going to taste. For instance, when you read the recipe for the Corpse Reviver n°2, you think it will be disgusting and in fact that’s not the case at all. The mix of all those particular ingredients is a game changer.
The product I love to work with are all the oxidative wines like sherry, port or madeira. I like the taste of nuts and dry fruits.

Where do you think we need to go to interview another bartender?
You need to go to meet Hidetsugu Ueno in Tokyo, the owner of High Five.