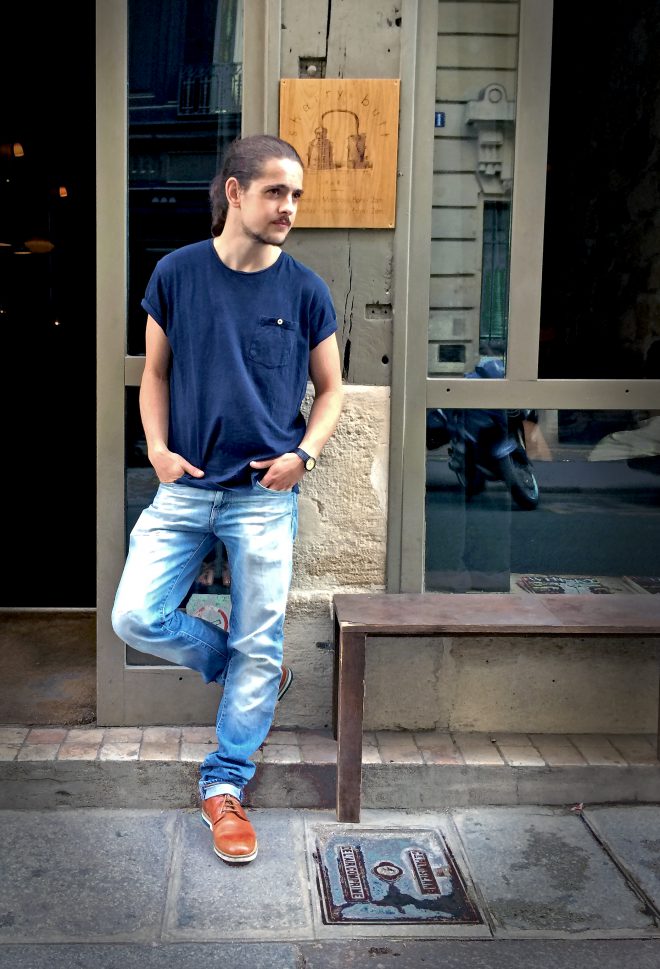 Jonathan, is a bartender at Sherry Butt in Paris. He makes two cocktails for us, one with Whisky and Noilly Prat, and the second with Rum and Cumin.

Jonathan introduce yourself
My name is Jonathan Le Mée, I’m 24 years old and a bartender at Sherry Butt in Paris. I started in the hospitality industry as a chef when I was 16 years old. I quickly realised I wanted more interaction with customers, so I started as a waiter, but missed the creativity of cooking. When I was 18, I decided try working behind the bar and got my first job in a a pub. When I moved back to Paris, my ambitions had changed and I wanted to become an actor, so I went to the Cours Florent, a famous acting school which is expensive so I had to work as a head waiter to pay for my tuition. I started to feel maybe I had made the wrong choice,  so I got a job a job on the floor in a cocktail bar called Le Fumoir and soon started working behind the bar and left Cours Florent. After that bar I worked at Moonshiner before joining the Sherry Butt team. My choice with both Moonshiner and Sherry Butt was to work on another level with cocktails. When you try to do something you should always try to do your best and constantly learn.

The bar or party you dream of

A big rooftop bar with a swimming pool in Paris. To get to the rooftop space customers would use segways and to exit they would go via a giant slide. It would be a huge space for people to be able to explore and have loads of tables and seating for 150. There would be a garden and many plants so you don’t have the feeling you’re in Paris. I’d want a large bar with 3 stations, a massive back bar with a wide choice of whisky, rum and some organic wines. A small kitchen would prepare tapas behind the bar too. The music would be a mix of hip hop and ethnic and opposite the bar would be a stage to host bands. Of course, all the materials in my bar would be premium and I would have many handcrafted wooden items of furniture. I want to design the glassware myself, I think it would be a blast. These are just my initial thoughts because the bar would evolve with customers wishes and changing tastes.

When I go out, it’s more about restaurants or to try new cocktail bars. Some of the bars I like to go to are Danico or Mary Celeste, but there are many others.

The spirit you like the most
I’m a big fan of akvavit for cocktails. It’s like a gin where you infuse spices in a neutral alcohol base, but with the cumin it’s far more vivid than gin. It’s not a common taste and it works with a lot of flavours. The main spirits like rum, whisky, gin or cognac… have been used for a long time and akvavit is newer and there is still a lot to discover. As a brand, I love Linie Akvavit, because they put akvatvit in sherrycasks on ships that sail around the world to age it.

A good cocktail is about balance and quality ingredients. When you make a homemade syrup, it’s always better than an industrial one. And of course a bartenders techniques… like dilution timing, the ice they use and the way they shake or stir.

I like sherry, because it gives a longer finish to a drink with nuances that create a more complex cocktail. In fact, it changes the whole structure, so you have several tastes as it helps to decompose the cocktail. My favourites are fino and manzanilla.

Where do you think we need to go to interview another bartender?
You must go to meet Ueno from High Five in Tokyo and also check out Dead Rabbit in New York.

This Saturday 17.9.16 is Sherry Butts 4th Anniversary party… hope to see you all there.