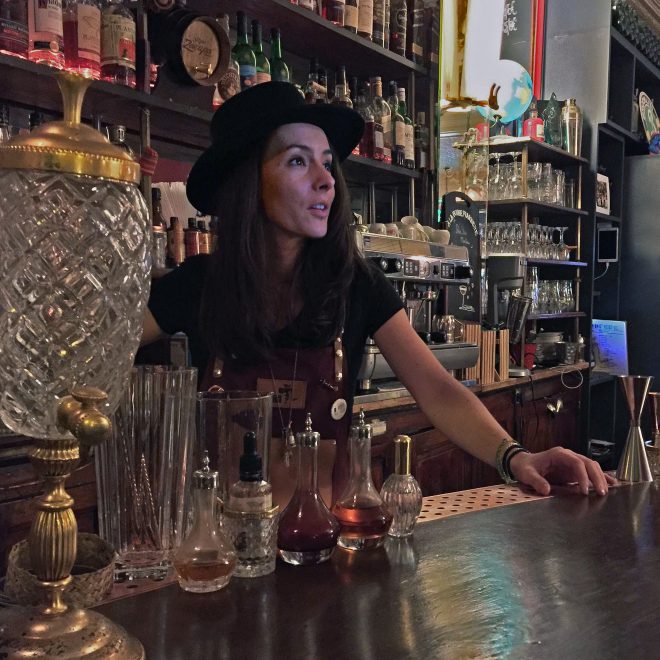 Jennifer is a bartender at Café Moderne, Paris. She makes two cocktails for us, one with Rum and Suze and the second with Bourbon and Rye Whiskey.

Jennifer introduce yourself
Hi, my name is Jennifer Le Nechet, I’m 29 years old and I work at Café Moderne in Paris. I studied Spanish and South American civilization and literature at university and after graduating I didn’t really know what to do. One of my best friends insisted I work at his brasserie to earn a little bit of money and I said yes. I started as a waitress and did some shifts behind the bar as often as possible throughout the year. Of course, as it was a brasserie I was mainly making mojitos or cosmopolitan cocktails, but I really liked it. I moved to another place for 3 years, and even though it was still a brasserie, there was a more complex cocktail menu which included some signature drinks. This is where I began to create my own cocktails, infusions and bitters for the first time and I became more and more attracted by the chemistry and creativity involved. But I was a selfmade woman and I felt I needed a mentor… someone who could coach me to move to another level. So I asked the bartenders at Calbar if they knew good bars that were looking for a bartender. They suggested Red House but they had already found someone, so they sent me to Café Moderne. I arrived at 6.30pm on a gloomy winters evening, I had a long discussion with Mido during the set-up which is not common and he asked me back for a trial, even though he had a lot of people applying. I’ve now been working here for 1.5 years and I feel like our meeting was fate. From the very beginning he asked me if I would be interested in competing and he explained to me his own experience from the World Class competition. I thought I would begin to compete in two years, but in 2015 I watched the French final for World Class and it blew my mind. I attended my first master class soon after and thought if I prepare, work hard and create something I am proud of, I would present and enter my cocktail for World Class 2016. I was selected with my cocktail, l’amulette and then I had two very intensive months to prepare for the French final, which I won. I flew to Miami in September and wow, I won World Class 2016. I was the first French person and the first woman to win the competition.

The bar or party you dream of
I have many ideas for several bars, but there is one which I want to open with a friend in Paris in a year or so if everything goes to plan, so I have to keep it a secret for the moment. After that I do have another dream to open something wilder. Beyond just a bar or restaurant, something that has never been done before.

I generally stay at home, because working in the bar is very intensive and you need to find time to chill. I love motorbikes and take long rides if I need to clear my mind. I also enjoy photography even if I haven’t had much time for it recently.

The spirit you like the most
It’s a recurring question, but honestly I work with everything. It’s like when you dress in the morning, sometimes you want to be casual and sporty and sometimes more chic, it depends on the context and your mood. It’s the same for me and spirits, it depends. In the end, if it’s a good cocktail, the spirit you used does not matter.

What makes a good cocktail and which product do you want to highlight at this moment
Many people say balance is important or structure. For me, what is the most important is what is around you. The place, the service and the relationship with the team. An excellent cocktail is not enough as everyone makes good cocktails. It’s more about how you welcome your customer, how you make them feel. This is what the customer will remember. Not only the cocktail, the entire experience.

It changes, but at the moment I am into tea, especially a green tea with dry fruits that Mido introduced me to recently. I love the scent and it has notes of pineapple and papaya, so I use it a lot in the smoking gun with whisky.

Where do you think we need to go to interview another bartender?
If I really have to name a bar, I love Gravity bar for the cocktails and the nibbles. Out of Paris, I recently did a shift in Athens at The Clumsies, which I loved. The bar has two completely different ambiances (downstairs and the room upstairs) and the cocktails are very very high level.