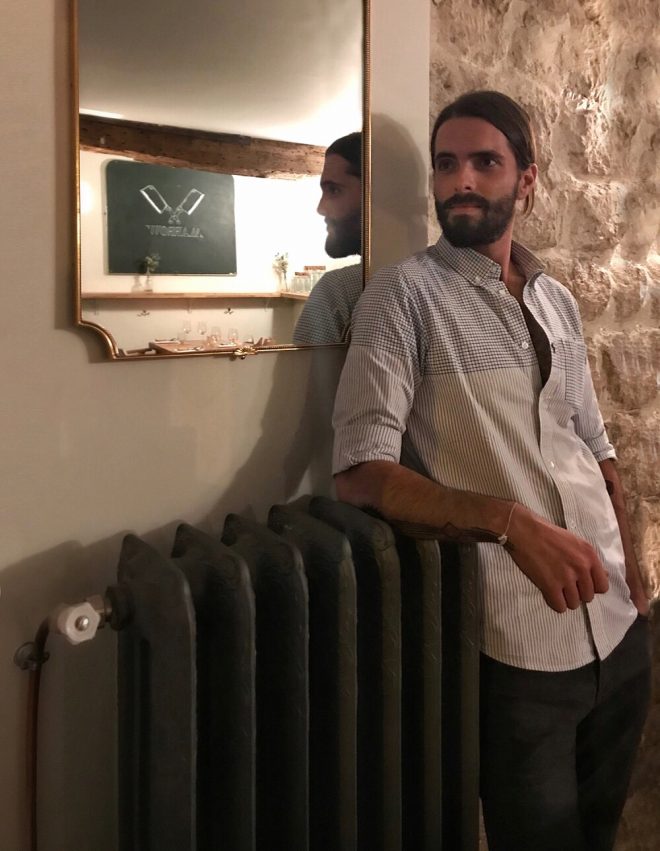 Arthur Combe is co-owner of Marrow in Paris. He makes two cocktails for us, one with Rum and Vergeoise and the second with Cognac and Aperol.

My name is Arthur, I am 32 years old and I’ve worked in the hospitality industry for 12 years now. I have a classic background, starting in restaurants like Maison Blanche in Paris where a bartender introduced a new cocktail of the day, every day. I realised even if working in a restaurant was cool, working in a bar seemed even better. So I moved to London and began working at the bar of the Hilton Park Lane on the 28th floor, which has an amazing view over London and the Queen’s garden. I moved back to Paris in 2006 and began to read a lot of books about cocktails. Luckily I was living not too far from Mama Shelter, where I met Nico de Soto and Joseph Akhavan and began working with them as a barback. I moved to China Club as a bartender and finally started working at Curio Parlor, where I stayed for six years before being put in charge of the training and new menus for the ECC Group. Curio closed and my friend Hugo, the chef at Marrow was coming back from London where he had been working at L’Atelier Joel Robuchon. We have always wanted to do something together, so we looked for the right place for two and a half years, until we found and opened Marrow on the 13th June 2017.

The bar you dream of
It would be this one, but maybe a little larger, with 45 seats instead of the 36 we have now. I love the way this place works with its three different spaces, but sometimes I would like a place where I work side by side with Hugo, the chef, so there is no separation between the kitchen and the bar, which was actually our original idea. The other bar I dream of in the next ten years would be a small hut on the beach in Portugal with one cocktail and one type of grilled fish on the menu and I’ll be barefoot behind the bar.

What do you do in your time off
I love to organise dinners at home with friends. Otherwise I enjoy going to Castor Club and righting the wrongs of the world while we drink.

The spirit you like the most
At this time, I love to use cachaça. It’s powerful and fresh at the same time and you can do a lot of different cocktails with it, from short drinks in a mixing glass to shaken long ones. There are some very good cachaças that are at the same level of Clairin rums in regards to flavour. I love the Magnifica, it comes from the moutains near Rio de Janeiro and it is distilled 2 times instead of one.

What makes a good cocktail
First a bar with a good atmosphere, then a good set-up is key, then of course balance and dilution. People don’t focus enough on dilution, it’s not their priority and it should be.  The guy who invented the hard shake, Kazuo Uyeda from Tender Bar in Tokyo, wrote a book named Cocktail Techniques and everyone should read it. His book gives a full framework of techniques and he explains what the temperature of your gin should be, the number of ice cubes to use in your shaker and how long you stir/shake.

What ingredient do you enjoy using in cocktails
I love dry vermouth. It gives the taste of a dry wine and you can’t get that from anything else. It makes the drink longer in the mouth and reduces the ABV. My favourite is Dolin dry because of its vegetal taste.

Where do you think we need to go to interview another bartender
Go and visit Soren at Ourselves Alone in Copenhagen or closer to home, speak to Margot and Elise at Combat in Paris.