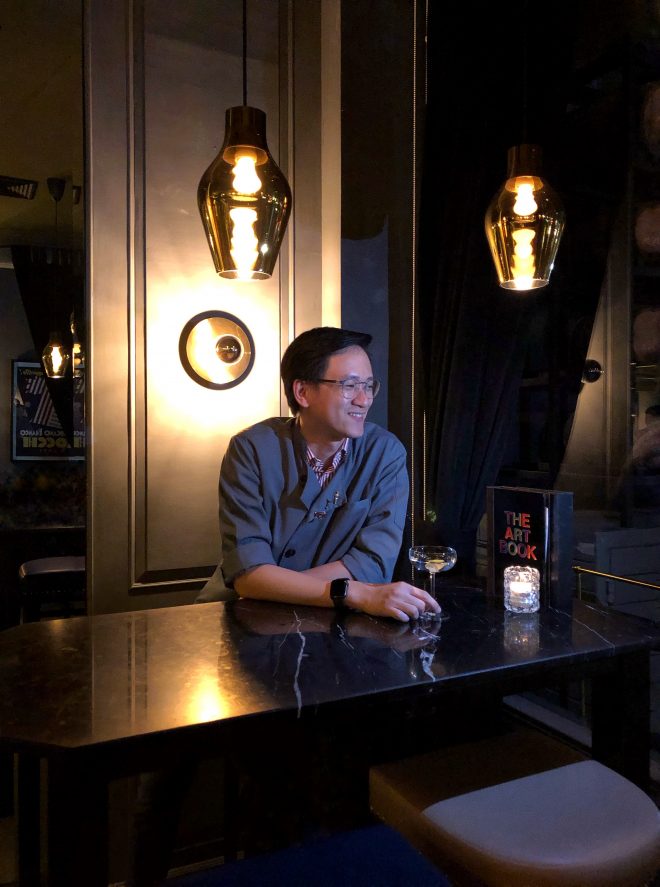 Supawit “Palm” Muttaratana is the bar manager of Vesper in Bangkok. He makes us two cocktails, one with Gin and Vodka and the second with Rum and Chardonnay.

Palm introduce yourself
I’m Supawit “Palm” Muttaratana and I started my career 16 years ago after graduating from University, where I studied Hospitality and Management. I started as a barista, then became a barback, until I became a bartender at the lobby bar in a hotel. In 2012 I won WorldClass in Thailand, then opened a bar consulting business, before Diageo offered me a job as an ambassador for their Reserve Portfolio. I opened Backstage Cocktail Bar with friends around the same time, so did both simultaneously for four years. I left Diageo to become the bar group manager of the company which owns Vesper and four other venues in Bangkok. Vesper is not just a cocktail bar for me, it’s more of a place you want to come to chill and have a good time, with a cocktail, a beer or wine. Regarding cocktails, our Art menu is actually now in its third version. The new one we are going to release at the end of November is about contrasts, like young and old (but with harmony), moon and sun etc.

The bar you dream of
For me, it would be in Bangkok, simple and small (for around 20 people) and be operated by two bartenders. So we could really take care of everyone and offer them personalised service that makes them feel better than when they entered, no matter what their state of mind. The interior design would feature wood, marble and rustic furniture. I’d like to serve food from the local shops near the bar.

What do you do in your time off
I go to the cinema and I read every day before I go to bed, as it gives me ideas. If I have time I like to travel, my last trip was to Egypt and Jordan, it was incredible.

The spirit you like the most
Now It’s about mezcal. In Bangkok, we don’t have a lot of different mezcals, but I really like its unique flavour with the smokiness, the terroir and it’s slight umami quality. I think mezcal is going to be bigger and bigger here in Thailand.

What makes a good cocktail
It’s many factors. First the spirit and ingredients selection, then the balance. But the biggest factor for me is the skill of the bartender because you need to understand what you have and are working with. It’s also about service, which can determine the difference between something good and something amazing.

What ingredient do you enjoy using in cocktails
I like working with tea, it’s in the Flower Carrier drink I made for you. Even with the same tea, you can have different flavours, depending on the dilution and the timing. Even with a tea bag instead of local tea, everything is different. I love to do tea pairing in my restaurants. Mezcal, for instance, is great with oolong tea.

Where do you think we need to go to interview another bartender
In London, I would say Erik Lorincz at Kwant, he has been my role model since I saw him on YouTube in 2010. I watched all his videos and he has done two guest shifts here. Next year I’ll go to visit him in London. Here in Bangkok go to visit Nick at Asia Today and his other place, Teens of Thailand. He has changed the neighbourhood and now is launching the Gin Fest and Bangkok Bar Show. Ronnaporn from Backstage has a strong will, he focuses on something and gets it while being a very nice guy at the same time.