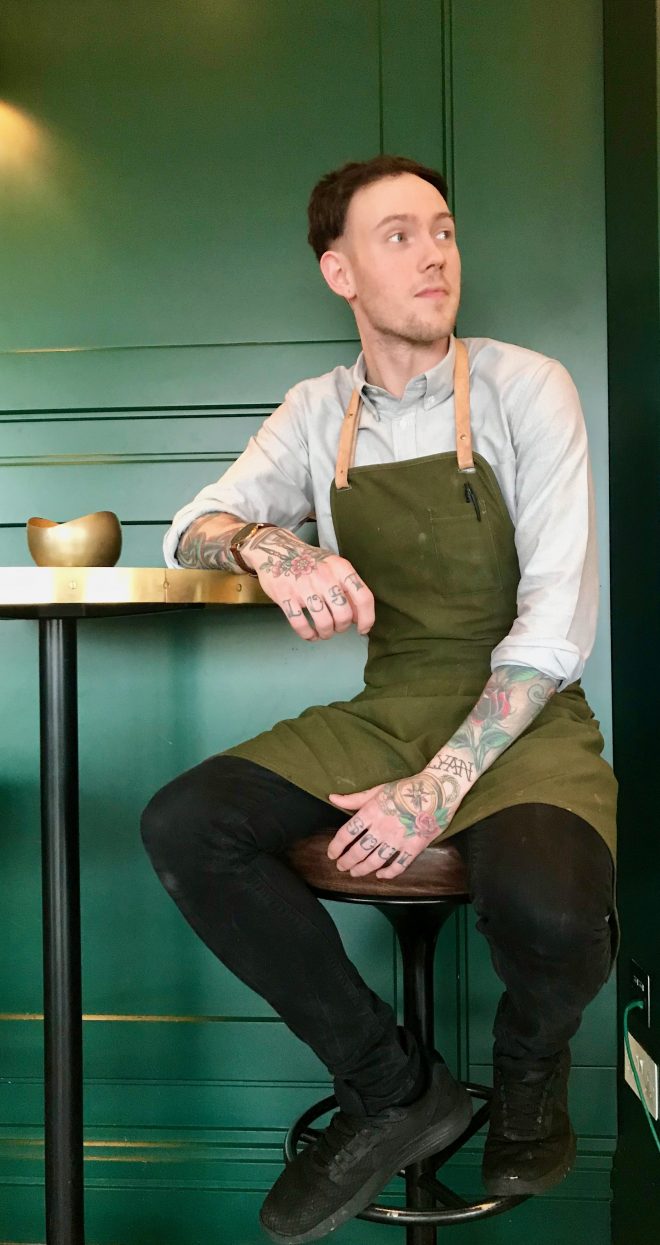 Alex Lawrence is the Head Bartender at Dandelyan, in London. He makes two cocktails for us, one with Gin and Fino Sherry and the second with Vodka and a Pink Sour Mix.

Lawrence introduce yourself
I am Alex Lawrence, originally from Edinburgh, but I moved to London to work at Dandelyan. Originaly I became a bartender for economical reason like a lot of us. I was doing music and equipment is expensive, so I had to start to work in clubs and bars. In 2013, I created my first cocktail and realize that it can be creative, skillful and I begun to think about it as a real job where you have satisfactions. Then I tryed to raise my game, used rotovap and made more crazy stuffs when I used to work at Orchid in Aberdeen. First time I walked in Dandelyan , I thought, that’s may be my favourite bar in the world. So I annoyed them for 6 months,  by sending my CV everyweek, and now I work here.
Otherwise I am the co-founder of Porter’s Gin that we launched a little bit accidently. We were distiling and using the rotovap in Orchid and thought that may be we could make gin for the bar, then why not Aberdeen or the whole region. Now it’s an international brand. So from a funny idea it becomes an adventure, even if now I have less time for that. But I work with amazing people and on daily basis who push the brand for me and my partner, like our new ambassador for UK, who do an extraordinary job. So I can just focus on where I have the most added value, behind a bar and at the same time keeping the creative direction without sales call to manage, an ideal situation.
We just launched our new menu in Dandelyan, The Modern life of plants, and it’s like Dandelyan 2, not just a new menu from a serie. New design and new approach too, even if it’s still about modern botany. We read a lot of cooking books to check if we can change our approach: added vinaigrette or use butter without the flavour. At the end we are cooking more and more for our drinks. We try to tackle ideologies of the positives of industrialisation, on how these plants are now available all year round and limit waste management. We focus on how humans industrialise crops with 3 of them:  hops, mints and grapes, even if we not necessarily not using all of them as ingredients. Each crop will have four drink concepts including one low abv cocktail. Usually our menu is for the year, but this time even if we’ll keep the concept for the year, we’ll change the drinks three times. So if seasons can have an impact on the garnishes, not on the liquid part.

The bar you dream of
I am kind of already working in it, mainly because of the iconic design of Tom Dixon that I like, even if I love the one at Edition Hotel,  especially the backbar inside the Berner’s Tavern. I like also the design of the Scarfes Bar at the Rosewood Hotel. Here it’s a high volume bar and the secret is to have a killer team to meet the demand. It’s more important than anything else. Everyone knows it’s job, split the tasks, that’s fantastic and intense because you can go faster and faster. It’s 11pm, the bar is full, music is pumping, the bar is on fire but everything is still clean, drinks arrive all around with a perfect timing. That’s the moment where you feel special. So I think I would build a team before building a bar. You can have the best bar visually with expensive booze, but if you don’t have the right team, it won’t be good. Food is important too, from a proper meal to just nibbles. To survive an entire evening in a bar, you have to feed your stomach and fill your ears with music, like Satan’s Whisker which has an amazing soundstrack. I would just change the location to Lisbon because economicly it’s growing, and the cocktail scene too.

What do you do in your time off
Most of the time I am surrounded by food. I like cooking myself, and to make something proper it takes half a day. Otherwise I need green spaces, so on Sunday I like to walk in parks with my girlfriend to clear my head.

The spirit you like the most
I’ve always laughed about bartenders who always use the same ingredients, same flavour, but I keep to use mezcal in all my drinks, it’s ridiculous. I use just a small amount to add complexity to the drink, to add a vegetal notes in it.

What makes a good cocktail
Real balance is something you don’t find really often. Not only about sweetness or dryness but balance of flavour too. When people want a drink based on cardamon, instead of putting a little bit of it, it’s always too much, as it needs a lot in it, but no. That’s why old classic cocktails are great with just simple flavour. It’s true for us too, we work with the whole team, and sometime we push to much a flavour, and it’s awfull. You have to be honest with your team and yourself and say it when you are wrong. At the end, it’s more about honesty than balance, I guess.

What ingredient do you enjoy using in cocktails
Miso paste is my stuff, you can use it as a consome to make a syrup. It’s like mezcal for me. Not to have the taste but just to twist the taste of the cocktail. It gives a kind of salteness to your palet and it changes the texture too. You can use it to give the right balance to your drink. It’s like my bartender’s ketchup. Someone ask me a drink out of the menu, I don’t know what to do, so I think, ok let’s do something with miso. It’s gonna be weird but really nice.

Where do you think we need to go to interview another bartender
Go to visit Max from Three Sheets and Jake from Social Club in London. Go to Nomad in New York. Otherwise go back to my first bar in Aberdeen, Orchids. For a little bit of sun go to Palma de Mallorque to visit Joe Lewis-White’s in his new place, Ginbo.