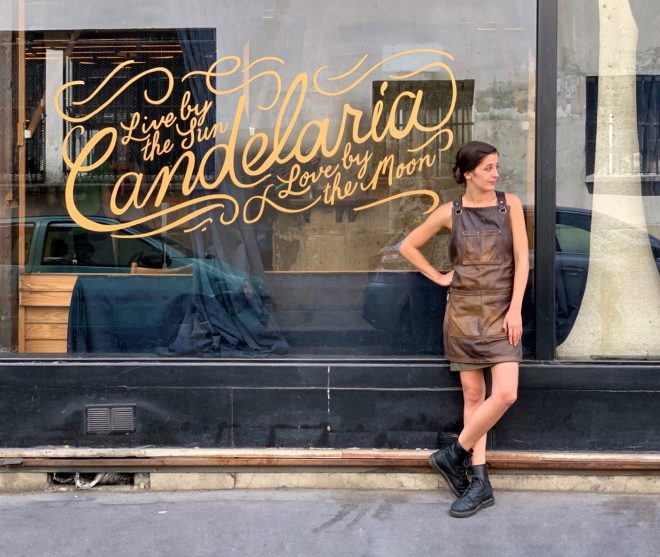 Cristina Hernandez is the head bartender at Candelaria in Paris. She makes us two cocktails, one with Tequilla and Coriander and the second with Picso and Fino Sherry.

Cristina introduce yourself
My name is Cristina Hernandez and I am from Caracas in Venezuela. I arrived in France when I was 20 years old to study cinema and at the same time, I was working in dive bars. At the end of my studies, I realised that I was more interested in working in a bar. My mother said to me, it’s a real job and if you like it, go for it. I decided to stay in France for another year until the Venezuelan situation got better. I’ve now been here 12 years and it’s not getting any better in my homeland. I started to work at Rock’n Roll Circus and Kremlin in Pigalle before it was a cool area. Because the two locations were former hostess bars, we had many guys coming in looking for girls, which was funny. Scotty who was my first boss and taught me everything, when he opened Dirty Dick, he asked me to join the team. After three years of working in the same group, I made a change and joined Mary Celeste for six months. I wanted to experience working in nightclubs and an opportunity arose at Silencio, where I stayed for a year. It was very formative and rewarding, but also exhausting. I found a middle ground with Le Ballroom a night bar, which is part of the ECC group. It was a great “school” and you can see most of the founders of the larger cocktail bars in Paris came from the ECC group. I moved back to Mary Celeste because I wanted to work there again when I was offered the head bartender position at Candelaria. I had always wanted to work there because I am from South America and Candelaria is all about cocktails, food and music from the region.

The bar you dream of
My dream bar would be a bar with no economic approach or need to make money. For instance, I would like to work with only small brands, because they work hard, do good stuff and struggle a lot and I would like to be able to support them. A place where I could select the customers, (not like a members club), but with a magic door that blocks dickheads. I’d also have a magic DJ who plays the music people are expecting and automatically adapts his music to the mood. I would also like space to dance and a live Cubano band with 50 musicians. In my dream, you can fit 100 people, the walls would be magic and adapt their shape for the mood… from party to romance. A big terrace with a tropical ambience, palms and bamboo and a view over the sea. Small fried finger Mediterranean food to share and because it’s magic the fried food would be healthy. The bartenders would be magic too, so they welcome you and in one minute they understand what you want and create the drink you want. Kind of like a magic Bisou Bar. I’d like a great whisky selection too because in Venezuela people drink a lot of whisky on the rocks. Of course, we’d use magic clear ice, with no need to prep or manage it, because, in our job, ice is key. A lot of champagne too because it’s about partying. I love champagne with Peychaud bitters, so that would be our shots. This dream would be in Venezuela but with a better domestic situation.

What do you do in your time off
I go a little bit in other bars so I can visit friends. I played a lot of ultimate frisbee in Caracas and on Monday when we have a day off, I have picnics in parks and play frisbee with my colleagues. I also watch series, in particular, HBO. My mother writes scenarios and she sends them to me, so we can chat about them. Otherwise, I travel, especially to hot places, like Africa. Northern Africa for instance, it’s easier or Kenya because I have a friend there. I travel where I have friends so I can have an internal point of view and not just a tourist one. I believe it’s important to understand a country.

The spirit you like the most
It has evolved since beginning bartending, but right now I would say mezcal because I can play with more than 50 mezcals here at Candelaria, so it’s great.

What makes a good cocktail
Balance for sure, but temperature and dilution are also key. Because a drink just out of the shaker is not an issue, but ten minutes later it’s another matter regarding the dilution. For me, I like simple cocktails, where you can taste each ingredient. Usually, you choose a cocktail for an ingredient, so you need to taste it.

What ingredient do you enjoy using in cocktails
I love lime. I love the acidity and the taste as it reminds me of my childhood. In any cocktail, just a twist of it is the best.

The signature cocktail you want to show us
Maldicho
30ml of Pisco
20ml of Fino Sherry
2.5ml of Pomelo
20ml of Lime
10ml of Simple Syrup
1 olive

Where do you think we need to go to interview another bartender
For the hospitality, La factoria in Puerto Rico. They are such a lovely team and can be proud of their work. There is definitely something special there. Floreria Atlantico in Buenos Aires because they are very knowledgeable and humble at the same time. In Paris, Frequence, I love the concept or Combat, Margot does a great job and Cambridge public house with Hyacinthe is great too.