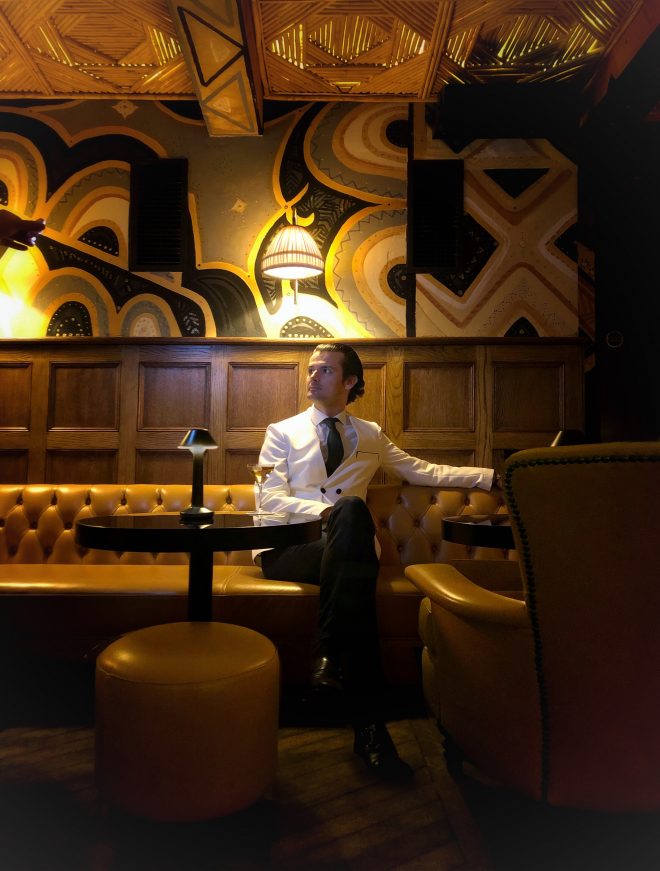 Erik Lorincz is the co-owner of Kwant in London. He makes us two cocktails, one with Gin and Cordial and the second with Tequila and Lacto Fermented Purple Carrot.

Erik introduce yourself
My name is Erik Lorincz, I’m originally from Slovakia but have worked in London for the past 15 years. I began my career studying Hospitality Management in Bratislava which is where I first became interested in bartending after watching a video in class one day. When I saw an ad for a Beefeater Competition in Prague in 2000, I booked a ticket, took my camcorder and recorded the entire competition. Finally, I had something to watch and study. I found a bartending school in Prague where I enrolled and began an intense period of studying five days a week (learning five classic cocktails a day), then catching a six-hour train back to Bratislava to work all weekend in a cocktail bar my instructor had introduced me to. At the end of my course, I started full time at the cocktail bar but knew I needed to learn English, so in 2004 I moved to London with nothing but a rucksack and a map. Whilst studying English I worked in a club called Attica in the evenings and explored all the local bars. I knew I wanted different bartending experiences, so moved to a restaurant bar, then into a hotel bar (Purple Bar at The Sanderson). When I heard The Connaught Bar was opening I joined Ago and the team to open the bar, as we all knew it was the beginning of a revolution in hotel bars. In 2010 I won World Class and stayed at The Connaught until I was offered the Head Bartender position at The Savoy. I will never forget the day the bar opened… it was the 10th October 2010 at precisely 10.10am and I couldn’t sleep at all the night before. I spent an amazing eight years at The Savoy and the pinnacle was becoming the no.1 bar in the world. I’d wanted my own bar for a while and when the opportunity arose to open Kwant I went for it. I wanted to create a space that plays with light and has a tropical feel, inspired by the movie Casablanca and I think the designer Bambi Sloan has done a wonderful job. I also have a space to display my vintage spirits collection and a lab to ferment and distil. I also opened a bar with my friends in Bratislava (Antique American Bar) which I visit once a month.

The classic you want to show us
Our Gimlet
55ml of Oxley Gin
15ml of Our Cordial (Agave, Cassia Bark, Orange Flower Water, Citric Acid)

The bar you dream of
My dream bar would be Kwant by the beach in either Asia or the Caribbean, so I wouldn’t have to fake the sunset with lights through our bamboo ceiling. The menu would be altered slightly to incorporate local fresh fruits from the surrounding area and I’d definitely offer a food menu consisting of local seafood, as I love to fish.

What do you do in your time off
I love cooking, it’s how I relax and at the moment I am obsessed with my Green Egg (it’s my second shaker), so all my spare time is spent outside with the BBQ. When I am travelling, my other passion is fishing.

The spirit you like the most
I think that would be rum. As a category, I like its versatility, as you can make more delicate drinks like a White Lady with a lighter rum, right through to a boozier Manhattan with a darker variety.

What makes a good cocktail
It’s all about balance. The harmony of respecting the base ingredients and then building the flavours around them. I want a drink where not only the first sip has the ‘wow’ factor, but the last one as well.

What ingredient do you enjoy using in cocktails
It would be lime, as it adds a freshness to a drink. You can use it in so many different ways and it’s just delicious. I also enjoy using it a lot in my cooking.

Where do you think we need to go to interview another bartender
You need to go and see my dear friend Alex Kratena who has just realised his own dream and opened Tayer + Elementary. Also, go and talk to Joe Schofield when he opens his new bar in Manchester. I also love the guys at The Old Man in Hong Kong.