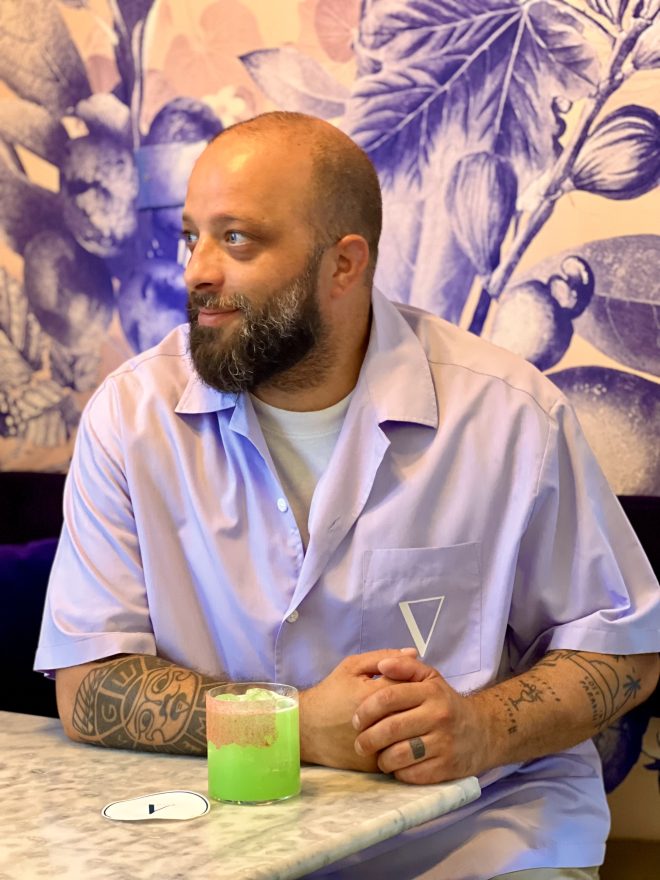 Enrico Scarzella is the Bar Manager of Velluto in Bologna. He makes us two cocktails, one with Amaro and Dry Vermouth and the second with Tequila and Masthia.

Enrico introduce yourself
My name is Enrico Scarzella, I am born in 1986  in the Veneto region. I have always been struck by the figure of the bartender since I was a child. After middle school, the choice could only be the hotel school. However, the branch I chose after the second year was the cuisine that fascinated me a lot. I learned a lot about the techniques which helped me develop even more the imagination that distinguished me. After school, I spent several seasons going from the kitchen to the dining room where I juggled very well and then consecrated my vocation for the bar to 24 years. I worked in various clubs of various types, from discos to street bars, where in the meantime, through various training courses, I learned and grew my educational background. I have never taken a path on mixing but I have always thought that there was no right or left or black and white, I have always merged the various techniques making them mine, in short, personalizing them. For 10 years I have been in Bologna, my home. When I arrived I immediately fell in love and even though I had important offers from Italy and abroad, I never let myself be influenced because I felt I had found a place where I could live a life right for me and for my work. I opened managing various important places, up to my creature .. VELLUTO.

The bar you dream of
Dreaming of the bar and the evolution as well as the maturation I have reached in the personal and work spheres, I imagined nothing other than Velluto. That is, the concept that we are slowly trying to develop. Once the venue was finished with the creation of the space on the lower floor, the idea was to create a real research and development laboratory where from the bar to the kitchen we will try to deceive people with shapes and textures.

What do you do in your time off
I also have a private life and since I have two splendid twins, I spend my free time trying to be with them as much as possible, and there is no better way to disconnect than transmitting my passions to them, from basketball to football. Get to my dispassionate love for the sea !!! The remaining free time I spend reading and updating marquees on my field.
Little secret, when I wake up at night I have a diary in which I write down all the ideas that come to me when I dream.

The spirit you like the most
My favourite spirit is whisky, its complexity bewitches me and every time I mix it I feel enormous respect for mixing it even in a classic old-fashioned or a Rob Roy. In a nutshell, my imprint and that of Velvet as it can be deduced is the classic one, with enormous respect and obsessive care. We have it even more in the creation of drinks or reinterpretations of the great classics.

What makes a good cocktail
In my opinion, only excellent ingredients aren’t enough to make an excellent drink, but you need the heart as in the dishes, the love for the work and how to make a drink you where can feel everything in the glass.

What ingredient do you enjoy using in cocktails
Other ingredients that I love to mix so much and with which to create new preparations to use are the billion seasonal fruits that mother nature has given us. With which you can create with a little imagination a lot of nice things completely with all the fruit, without throwing them away.

Where do you think we need to go to interview another bartender
If you stay here in Bologna, go to visit Nico Salvatori at Oltre. Otherwise, a great friend and someone I respect a lot as a bartender is Enrico Gonzato. He is currently the bar manager of Zuma in Dubai. Last but not least, another friend, Massimo Stronati works at Ettan in San Francisco.