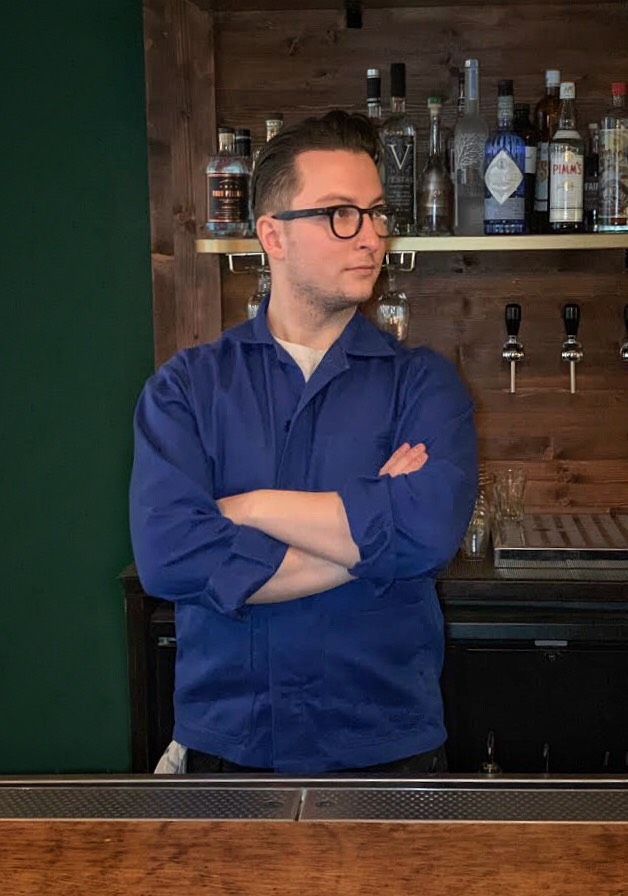 Razvan Chipara is a Bartender at The Cambridge Public House in Paris. He makes us two cocktails, one with Absinthe and Rye Whiskey and the second with Shitake and Aquavit.

Razvan introduce yourself
My name is Razvan Chipara from Romania. I studied bartending because I wanted to travel and for me bartending was the easiest way to do this and make money at the same time. For me, the best place in the world to learn to bartend was London so I moved there and stayed for five years. I got an opportunity to work at Milk & Honey where I worked for just over two years. Afterwards, I moved to the Vault where I learnt a lot about whisky. Then my girlfriend had a career opportunity in Paris, so I moved here and joined The Cambridge team with Hyacinthe who I’d met before.

The bar you dream of
My dream bar would be for 40 to 60 people, cosy with big windows so people can watch outside and we would serve modern French cuisine to pair with the drinks. The menu would be built in 3 parts: before dinner, during dinner and after dinner. We’ll have good beers and wines on the menu but we’d focus on cocktails because it will be a cocktail bar. Music would be hits from the end of the ’80s and the beginning of the ’90s. It would definitely be located in France, but near the sea, so maybe Marseille, as I love French culture.

What do you do in your time off
Especially now that I’m living in Paris, there is a lot to do regarding culture and I love Le Louvre and Le Grand Palais. Paris is also about food and this is where I find inspiration for my cocktails.

The spirit you like the most
It would be American whiskey. I like pre-prohibition cocktails or New Orleans style drinks, brown and stirred and rye whiskey is perfect for that, like in a Manhattan and the twists. My favourite would have to be De La Louisiane.

What makes a good cocktail
I think it’s less about what’s in the drink, and more about how you make the guest feel. The day after you remember the feeling more than the drink. You need to make them feel special.

What ingredient do you enjoy using in cocktails
I love coffee at the moment, as it can be very empowering or underwhelming. If you can nail it, it can make an amazing drink. It’s a real challenge to be on point with coffee.

Where do you think we need to go to interview another bartender
There is a bartender I used to work with at Milk & Honey called Kris, and now he has moved to Scotland. He is the head bartender at The Gleneagles, a 5-star hotel. In Paris, I love Lulu White, the whole team there is great and it was the first bar I went to Paris.