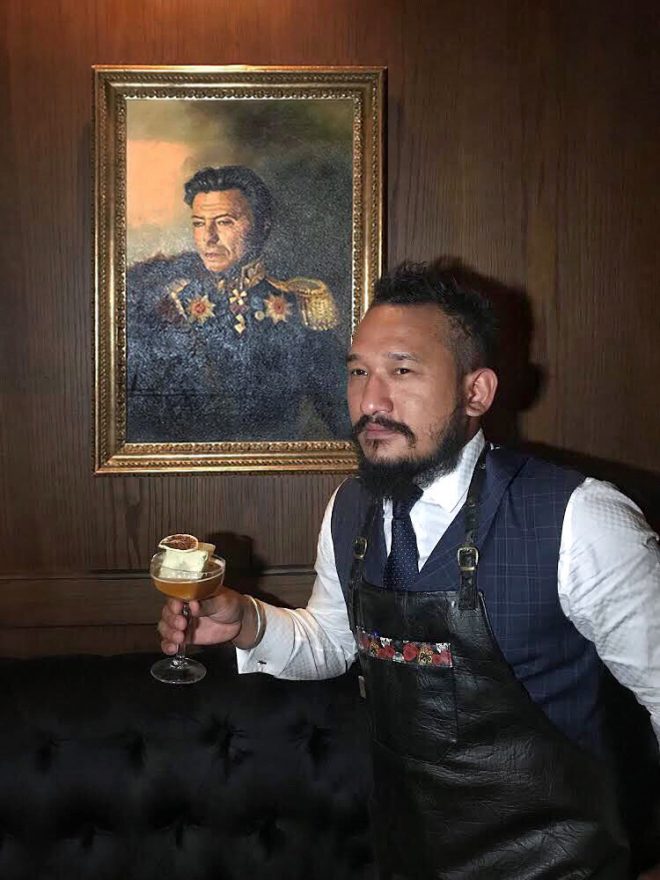 Suraj Gurung is the Head of Mixology at Stockton in Hong Kong. He makes us two cocktails, one with Gin and Cocchi Barolo Chinato and the second with Bacardi and Basil.

Suraj introduce yourself
My name is Suraj and I’ve been in the industry for about 10 years. When I first arrived in Hong Kong from Nepal I didn’t know what bartending was bout. I initially work as a runner in a restaurant, then moved into nightclubs until I decided to focus on becoming a bartender. At one point I wanted to be a chef, so the way I make my drinks is a concentrate on flavour profiles. I began as a barback, then moved to bartender, then bar manager and now I am the group mixologist.

The bar you dream of
My dream bar would be more a personal space located here in Hong Kong. I’d like to open a bar that relates to my own culture, using more herbs and spices from Nepal. There are more than 46 different cultures in Nepal and I’d like the drink and service to reflect this. It would have a British colonial ambience and be seating only. Old school music and good food inspired by traditional Nepalese cuisine would complete the overall concept.

What do you do in your time off
I try to exercise or read cookbooks. I like to jog or rock climbing.

The spirit you like the most
I like working with rum as it’s so versatile and it’s very popular. It’s a spirit that makes everyone happy, it’s easy to drink and I especially like Blackwell, Diplomatico and Ron Zacapa.

What makes a good cocktail
I think the vibe of a bar influences the way you feel about a cocktail. I would rather be served with a smile and great interaction, that’s what makes me remember a drink in a favourable light.

What ingredient do you enjoy using in cocktails
I enjoy using Chartreuse at the moment. I like the green and the yellow equally and we have around four drinks on the menu that include it. This ingredient is so beautiful when it’s used in the right way and respected.

Where do you think we need to go to interview another bartender
You need to meet Nico de Soto from Mace and Walter Pintus from Waeska Bar at the Mandrake Hotel and Lorenzo from Charles H in Korea.