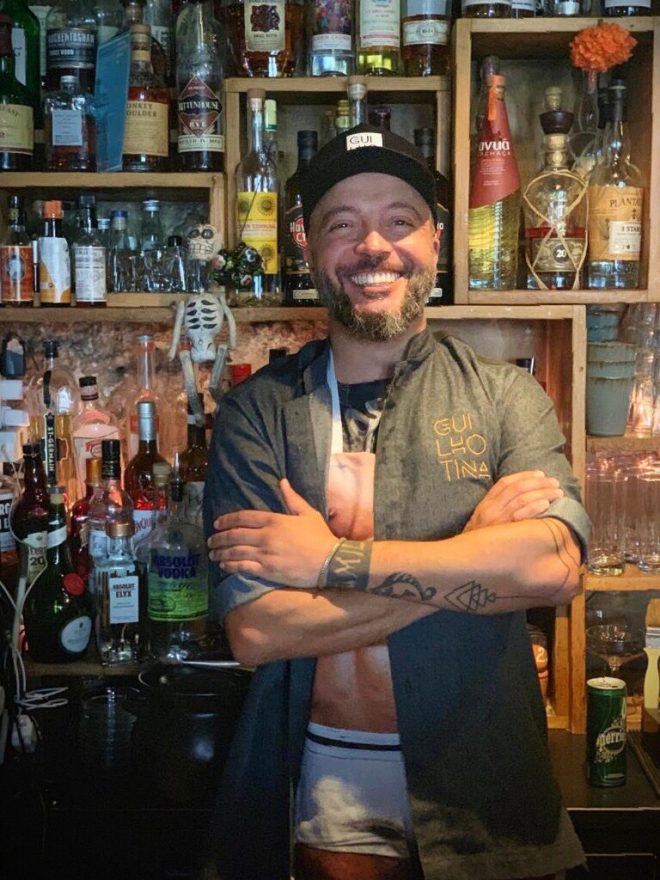 Marcio Silva is the owner of Guilhotina in Sao Paulo. He makes us two cocktails, one with Rum and Masala syrup and the second with Cachaça and Molasses.

Marcio introduce yourself
My name is Márcio Silva from south of Brazil but professionally I was raised in London where I started bartending in 1999 (1994 was the year that I arrived in London). the first time that I got back Brazil was in 2004 as a international trainer for Diageo, but I couldn’t fit in my own culture, so I left. In 2009 I got back again and I was able to open Subastor in São Paulo which was a huge success and after I became the global ambassador for Yaguara Cachaça. After that, in December 2016 I opened Guilhotina in São Paulo to I felt completely Brazilian. Besides our cocktails we also have a food menu made by two of important chefs in Brasil, a French called Benoit Mathurin and a Brazilian called Juliano Valese. The purpose of Guilhotina is not only to make cocktails but to give tools to our bartenders to succeed in life and become prosperous. Currently, the topic of our menu is based on bipolar disorder. So my bartenders had to study and learn a lot about it, to be able to express that in our 22 cocktails.

The bar you dream of
The bar you dream of I got the chance to create Guilhotina with 2 partners of mine (Rafael Berçot and Marcello Nazareth). The idea was to cut out all the bullshit behind the bar, (which is the reason for our name… from the French word Guillotine) and just have fun. It works so I wouldn’t want to change anything.

What do you do in your time off
I just chill or walk in parks with my fiancée.

The spirit you like the most
I love Cachaça, the family of my grandfather used to produce artisanal cachaça on the farm where I grew up. I remember the first time I tried cachaça was when I was 7 years old. The amazing thing about cachaça is not just the juice but the way the variety of Brazilian woods that we can age the liquor. Nowadays we can use more than 40 different types of Brazilian woods to make our barrels and it gives a large range of flavour profiles to play within a cocktail. I like herbal flavours in a cachaça or a dry type to balance a cocktail.

What ingredient do you enjoy using in cocktails
Right now I like cashew, (a local fruit from Brazil) which is a natural cocktail in itself regarding the balance and taste. So if you know how to use it in a cocktail, it’s great.

Where do you think we need to go to interview another bartender
I love Asia, so you should go to Vesper in Bangkok and Operation Dagger and Native in Singapore or Trench Bar in Tokyo. If you visit South Africa go to Mootee Bar. As a Latino, my favourite bars in the region are La Factoria in San Juan, Licorería Limantour in Mexico City, Floreria Atlantico and Presidente in Buenos Aires, Carnaval in Lima and Siete Negronis in Santiago de Chile and in Miami the guys from Spanglish Cocktail Bar.

Thank you to Candelaria for letting us do this interview during Marcio’s guest shift.