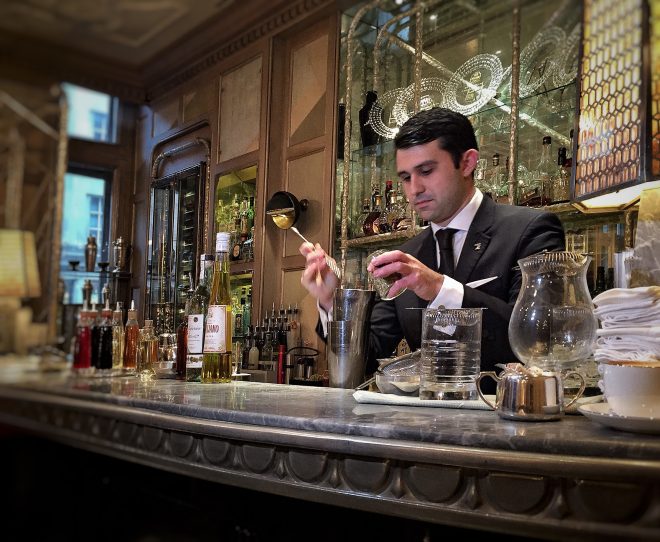 Giorgio Bargiani is a senior mixologist at The Connaught Bar in London. He makes two cocktails for us, one with Bacardi Heritage and Galliano Autentico and the second with Whiskey and Balsamic Vinegar.

Giorgio introduce yourself
My name is Giorgio Bargiani and I’m the senior mixologist here at the Connaught. I’ve always been in love with hospitality as my parents had a restaurant in our home town of Pisa, so I’ve always been around food, drink and people. After I finished school I studied communications at university and worked behind the bar in a nightclub in the evenings. I realised I wanted to combine these two worlds as I was passionate about both and decided to pursue a career  working in luxury cocktail bars. I began at a five star hotel in Portofino where I learnt a lot and decided to move to the UK to work at the two michelin star restaurant Le Manoir aux Quat’Saisons. I returned to Portofino for the summer season, but I now had a list of my top four bars I wanted to work at… The Connaught, Artesian, Nightjar and The Savoy. So, when a friend emailed me about a position as bar back at the Connaught I knew this was my once in a lifetime chance. I flew to London on the 8th August (I will never forget that date) and arrived, showered at a friends house and feeling loads of pressure I went to meet with their HR. This was followed by a 6 hour trial shift and then a one to one with Ago. I returned to work in Portofino and after 15 days they told me I had a second interview. I met the F&B director, flew back to Portofino and resigned. I moved to London one week later and started on the 18th September 2014 and I haven’t stopped smiling since. I wouldn’t change the last 3 years for anything.

The bar you dream of
My dream bar would be a tiny place in a small city in the heart of Tuscany. I’m Italian so there would definitely be food on the menu too. Food and drinks that speak for themselves like simple classics and local charcuterie and cheeses. My father was a carpenter so I like the idea of the interior being full of dark, mahogany wood to create a simple yet luxurious feel. I’d definitely like to have my girlfriend and a close friend working with me, with a heavy focus on hospitality.

What do you do in your time off
I love to go out with people and my girlfriend and I often visit bars like the Beaufort, Dandelyan, Satans Whiskers and the Savoy. We also love restaurants and going to the cinema.

The spirit you like the most
I like Tequila, because I like challenging people’s teenage memories of it. I enjoy changing a customers perception of tequila.

What makes a good cocktail
A smile.

What ingredient do you enjoy using in cocktails
Vermouth because it’s a cocktail in itself. It adds so much complexity to a drink and my favourite would have to be rosso.

Where do you think we need to go to interview another bartender
I know so many great people and bars, but off the top of my head I’m going to suggest four. In Pisa there is a bar on the beach called Sunset and it is so relaxing. Go and see Balash at Maybe Frank in Sydney and Ranier at Bodega in South Beach Miami. Oh and you must visit my old workplace Belmond Hotel Splendido and ask for Santo, one of the most charming people I know.

This is our last article for 2017. Thank you to everyone we’ve interviewed or had the pleasure of meeting this past year. We already have loads of great interviews lined up for 2018 and look forward to sharing them with you. Happy holidays, stay safe and enjoy some cracking cocktails over the break.