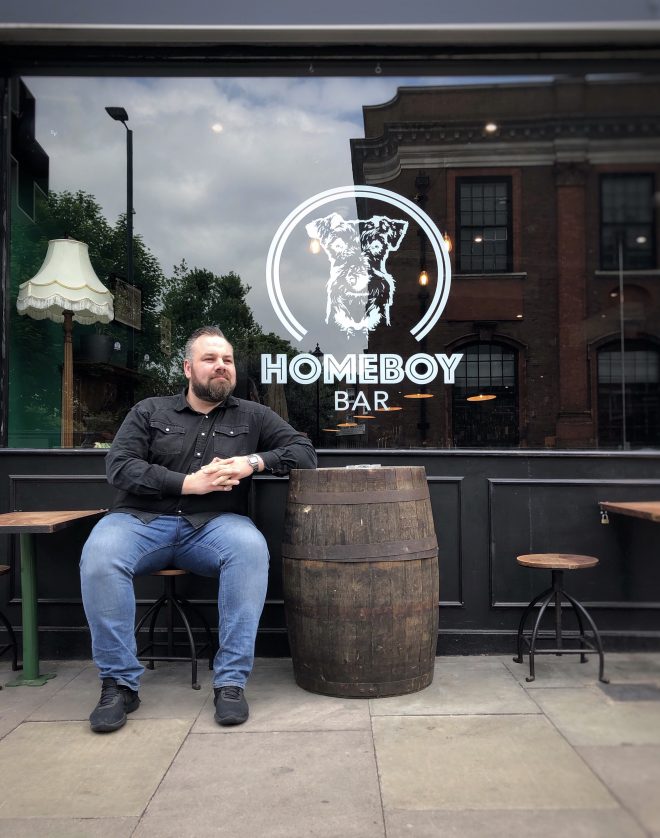 Aaron Wall is the owner of Homeboy in London. He makes us two cocktails, one with Irish Whiskey and Spinach Syrup and the second with Apricot Brandy and Lime.

Aaron introduce yourself
I’m Aaron Wall, a Dublin boy born and bred and I’m the owner of Homeboy in Islington, London. I started my career working on the door of a Dublin bar in 2002 when I was 17 years old. The Manageress suggested I start behind the bar to avoid becoming an arsehole and I made so many tips that night I never looked back. I moved to The Clarence Hotel cocktail bar and that’s where I really learnt how to make all the classics. I moved to Paris and ran a bar in St Germain for a year, then moved back to Dublin. I worked in a few bars before going to New Zealand to represent Ireland in the 42 Below competition in 2010. We came 4th and afterwards, I worked as Bacardi Brand Ambassador for 3 years. Then I moved to London at the start of 2016 and we were nominated 10 best high volume cocktail bars by TOTC in 2017. At the end of 2017 I moved to Callooh Callay working with great people like Will Hawes and Chanelle Andrade and in 2018 we were nominated top 4 best high volume cocktails bars by TOTC. In September 2018 LCC put this site out for tender and after my business partner, Ciaran Smith, and I pitching for it and won (the LCC guys were amazing with the transition). The name even comes from JJ Goodman always telling me that I should open a bar in Dublin because “you are always talking about Dublin you are such a HOMEBOY” I though I’m not done with London yet but thats a great name for a bar. We opened 6th of December 2018. We are all about Modern Irish Hospitality. With an Irish Whiskey menu making up 1/3 of the cocktail the rest are made out of classic and more contemporary concoctions. We balance this with the comfort of pint of Guinness and snacks like toasties and proper Tayto crisps sandwiches.

The bar you dream of
My dream bar would be a larger version of Homeboy in my home town of Dublin. Here we can hold around 120 people, so my dream would be a space for around 600.

What do you do in your time off
We really believe in looking after ourselves here, so I’ve actually started going to the gym again which I’m enjoying. I also love going to the cinema and I’ve started watching Game of Thrones… but don’t tell me anything as I’m only on Series 2.

The spirit you like the most
Irish Whiskey of course. In fact, the Queen herself said it was the finest spirit in the world (we are currently trying to confirm this piece of information from Mr Wall 🙂 ). For me, there isn’t a bad Irish Whiskey being made at the moment and different brands work in different cocktails. For instance, Roe & Co. has round flavours of wood, sweetness and pear which goes great with our Whisky Smash, where as Tullamore D.E.W. goes great with more robust flavour. Teeling Small Batch is great in drinks you might think would suit a light rum and something like Paddy or Bushmills goes great in drinks you’d typically think an oily gin would do well in.

What makes a good cocktail
Balance of course and I believe a drink needs to be easy to understand for a consumer.

What ingredient do you enjoy using in cocktails
I use an awful lot of lime, as you can make a shit load of drinks with it.

Where do you think we need to go to interview another bartender
In London, you must visit Joe Harper from The Savoy, as he’s provided me with some of the best moments I’ve ever had in a bar and if you can, you should also interview Peter Dorelli. Emilio from Artesian always makes me leave their bar happier than when I arrived. In Dublin visit Dave Mulligan at 1661 as I’d pay money to hear him talk and finally in New York go to Underdog and see Connor Myers.