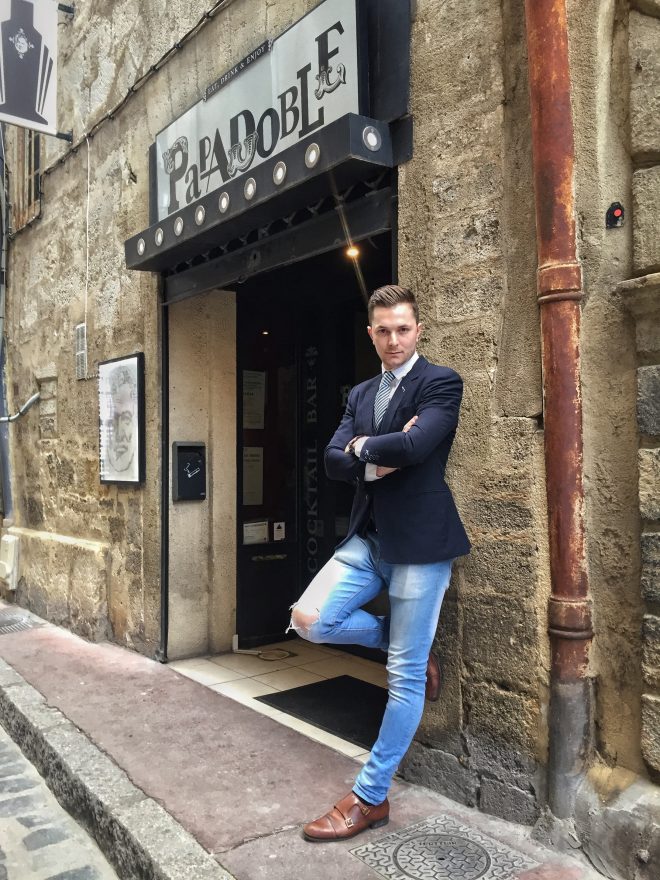 Lilian Sausset is the head bartender at Papa Doble in Montpellier. He makes two cocktails for us, one with Rye Whisky and Punt e Mes and the second with Amaretto and Absinthe.

Lilian introduce yourself
My name is Lilian and originally I was a landscape designer in the South of France. One day I was working on a terrace when I saw a bartender putting on an incredible show and I knew that was what I wanted to do. I wanted to make customers happy and create interesting cocktails for them to enjoy. I left landscape designing and became an apprentice at Papa Doble for2 years. I moved to China for a year which was amazing and now I have come back to Montpellier to manage Papa Doble.

The bar you dream of
My dream bar would be in Hong Kong over the bay as it’s more open culturally than mainland China. I’d want a bar where people can have fun and it would be open 7days a week. It could be just like Papa Doble, except in Hong Kong. So, just like here the concept would be around Ernest Hemingway (his nickname was Papa Doble when he was living in Cuba). The bar is all about salsa, good vibes and rum. I would like to work around the five elements, symbolised by 5 candles. You smell each one and each different candle relates to a different cocktail using local products. The design would be around the five elements too.

What do you do in your time off
I do a lot of sport and love running. When I’m not doing that, I like to cook.

The spirit you like the most
I love gin because it’s subtle and easy to mix with everything. It could be with tonic, or in cocktail or a shot. I like when it’s vegetal like Gin Mare with the lavender flavour.

What makes a good cocktail
Balance and the way a drink looks is key, like Artesian or Nightjar for example. Closer to home I really like what they do at Le Parfum, it’s very visual. It’s about the art of a drink.

What ingredient do you enjoy using in cocktails
Mint as it’s aromatic and fresh and works with everything.

Where do you think we need to go to interview another bartender
Go to Beijing to visit Botanic and ask for Frankie, a former chef. He distills his own whisky. Transit in Beijing is also cool, it’s all about spices and Sichuan style.