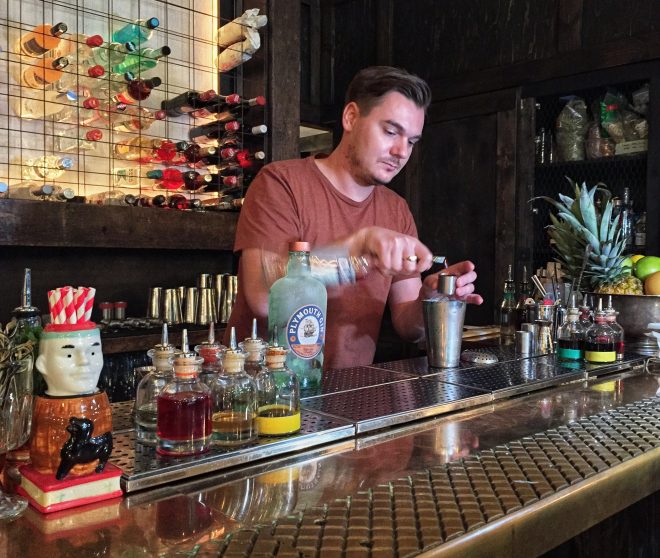 Marcis Dzelzainis is the Bar Manager at Sager + Wilde, Paradise Row in London and director of Abacus Drinks Ltd. He makes two cocktails for us, one with Gin and Campari and the second with Mezcal and Pineapple Shrub.

Marcis introduce yourself
I’m Marcis from Sager + Wilde in London and I kind of fell into this job fifteen years ago. I realised I preferred a career in the bar industry to academia whilst I was doing my MA in Religious Philosophy in Brighton. Academic life is very cloistered and I was enjoying my part-time job in a bar more than my studies. So I began working in a bar full-time and soon moved to London where I worked at Lab, Townhouse, All Star Lanes and was involved with the opening of Quo Vadis in 2008. I later worked with Tony C and became his Ops Manager, opening Zetter Townhouse in London and Le Coq in Paris. I opened Satans Whiskers and Dandelyan, where I was GM, until I came here. We have something new coming soon in East London… so watch this space.

The bar you dream of
That’s a really tough question to answer, as I always have three or four concepts floating around in my head. I do love David Lynch and am influenced by him and his ethos. Our latest project is called Liar’s Dice (which is a dice game from San Francisco) and it’s going to be a neighbourhood bar, with an 80’s influence. It will hold around fifty people and the interior is inspired by americana and we’ve taken quite a few design cues from David Lynch films. We’ll have food as well, as we believe it’s so important in a bar. I’m fascinated with music and the way it influences people too, so I’ve been listening to a lot of french electro pop, which is a re-invention of 80’s music to play in the bar. My business partner and I have a clear vision of what we want, but I’m sure it will evolve itself over time.

What do you do in your time off
I’m going back to David Lynch again. He is a big fan of transcendental meditation and it’s importance in the creative process, so I’m into that at the moment. It’s very calming and i really enjoy doing it. I also like to cook, listen to music, read a lot and watch crap films.

The spirit you like the most
I love cognac, as people tend to be very linear with it, when it’s in fact light and ethereal. I like to challenge the misconceptions about cognac and use it in unexpected ways. Cognac just has a finesse to it that other spirits don’t.

What makes a good cocktail
It’s all about balance for me. I also think a bartender should be self critical. If you have a niggle about something in your drink, trust your instincts. Look at it, re-evaluate it, adjust measurements or change it.

What ingredient do you enjoy using in cocktails
I really like using vetiver at the moment, as it’s not an easy ingredient to use and is usually associated with perfume. But it works so well in drinks, especially ones with citrus and mint.

Where do you think we need to go to interview another bartender
In London visit Coupette, Three Sheets and Milk & Honey. I am a big fan of Quixotic Projects in Paris, so you should check out Le Mary Celeste and Les Grand Verres.