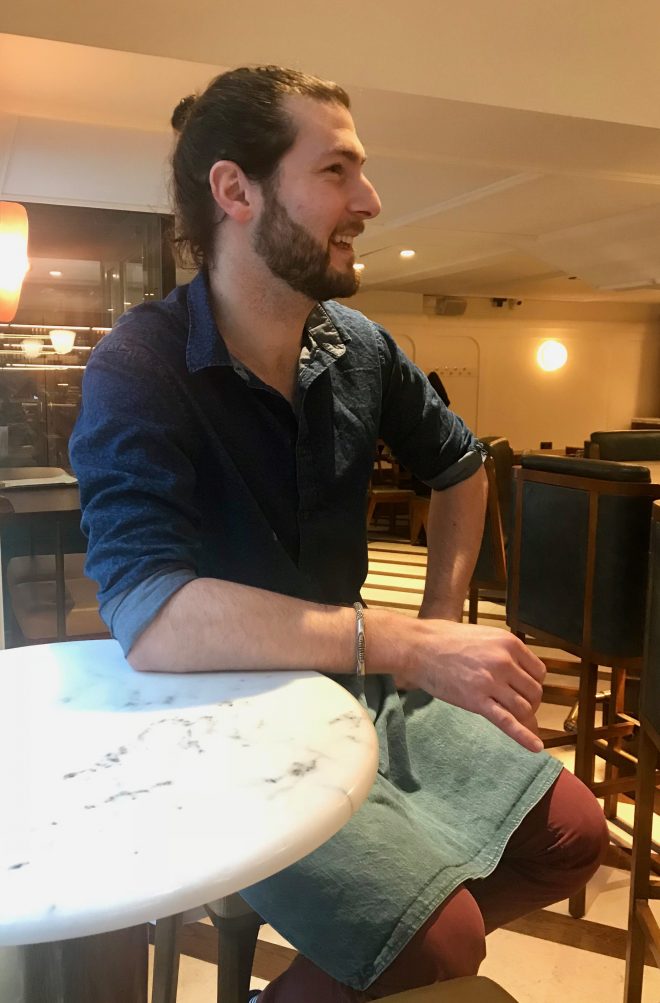 Steve Guven is the bar manager of Bonhomie, in Paris. He makes two cocktails for us, one with Mezcal and Kummel and the second with Chamomile Rum and Saffron Cordial.

Steve introduce yourself
My name is Steve Guven, I’m 37 years old and I am the bar manager at Bonhomie in Paris. I studied hospitality and bartending when the cocktail vibe in Paris was incredible. It was during the first phase of ECC, plus the launch of Candelaria and I really wanted to be a part of a these type of bars in Paris, but for one reason or another it didn’t happen. So a friend and I decided to move to London, the holy land for cocktails at the time. I started at Soho House, which had a high standard of service and was a major celebrity hangout, which was great. But I wanted to learn more about cocktail bars, so after six months I moved to Zetter Townhouse. All the drinks had to be validated by Tony Conigliaro who was the consultant for the bar or his right-hand man, Marcis who organised everything, and in fact, who created and made all the classics on the menu. Zetter was a real learning curve for me during my three and half years I worked there. Every month I had meeting at Drink Factory to improve my technique and learn how to use new tools. I moved to the new Zetter in Marylebone as head bartender with Roberta Mariani and Will Hawes who designed the menu alongside Tony C. An opening is really something, it’s like a storm, you need to train everyone and check every process. I stayed there a year and decided to come back to Paris to chill and spend time with my family. When I decided to go back behind the bar I contacted friends like Hyacinthe to see what positions were open. I met Remy Savage and Ben Tyler and took his place at Bonhomie when he moved to Bar Clandestino. I had to create a new menu, set up a new team with Laure and Stephano because everyone left at the same time. Now we’ve come back to a seasonal menu with nine cocktails which reflect different Mediterranean regions using local products. All the drinks are tasted by Chris the chef, Rory the CD, Carla the MD and Agos the sommelier, which I requested because I think it’s important to have different points of view. This new menu has drinks which take us from Spain to Turkey, via Greece and Lebanon.

The bar you dream of
My dream bar would be on a beach by the Mediterranean Sea. It would feature a few chairs at the bar with big tables outside on the sand where customers could eat food created by my brother who is a chef. Just a festive mindset with live bands and a chilled vibe.

What do you do in your time off
I try to stay home for one full day to chill and watch series on Netflix or go to the cinema. Otherwise I visit restaurants with friends and I try to travel at least two or three times a year.

The spirit you like the most
Versatile spirits like mezcal. What I like with mezcal it’s the maturation process and the honest side to the craft of making it. I really like what the Mezcal Brothers do.

What makes a good cocktail

Identify especially what your client doesn’t want. In the end, it will be more or less a twist on a classic because the structure is square, so it’s easier to start from that unless you are Operation Dagger and you spend your life in the lab. To be able to create something really new, you need to know your basics, texture, balance and palate to move somewhere else.

What ingredient do you enjoy using in cocktails
I love to use zaatar with it’s incredible mix of spices, consisting of oregano, thyme, sumac and sesame… it’s mental. It’s like feeling an oriental wind in your mouth.

Where do you think we need to go to interview another bartender
You need to go to visit Manon Kapfer at Gazelle, Osman at the Alexandra cocktail bar in Istanbul and Anne-Sophie Cros at the Lobster Bar in Hong Kong.