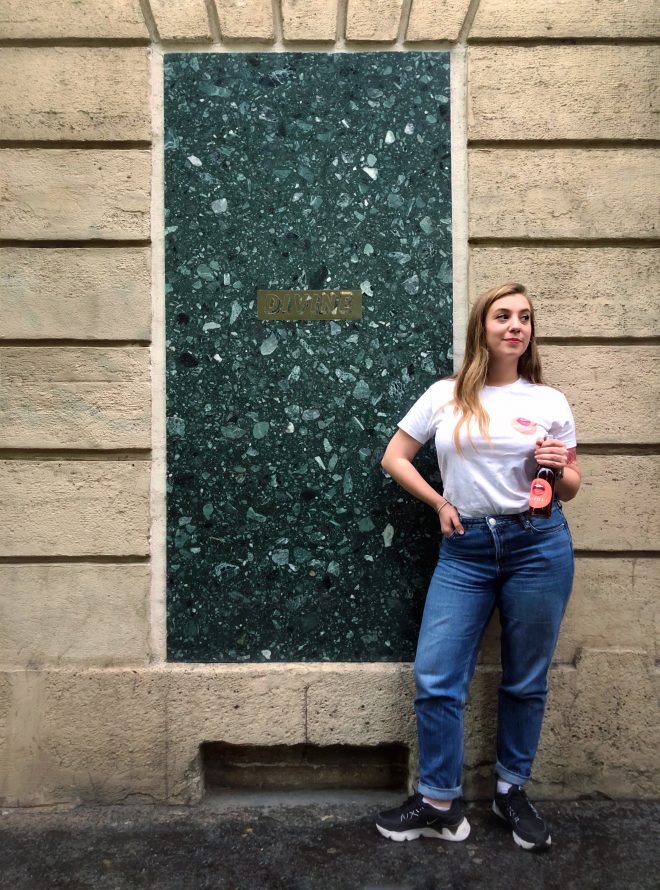 Pauline Le Dily is the bar manager at Divine in Paris. She makes us two cocktails, one with Fino Sherry and Lime and the second with Rum and Apple Cider.

Pauline introduce yourself
I’m Pauline Le Dily from Bar Divine in Paris. I studied hospitality and was elected best apprentice of the year for my region after several internships at Papa Doble, Montpellier with Julien Lopez and at the W Paris with Aurélie Panhelleux. I started working at Candelaria when I was 19, after graduating and stayed there for three years. Then I worked at Bisou, did a season in the Alps and now I’m working at Divine as bar manager.
At the moment I am preparing for the Bacardi legacy and every day it takes a lot of work. Originally I didn’t plan to do it, but Sara who used to work at Divine convinced me to do it with her and now we are both in the french final with Adrian. My cocktail represents how I see the bar. It’s not a complicated cocktail, with three ingredients, it’s a long drink that’s easy to sip and made directly in the glassware. You don’t need to be a high-level bartender to make it, I wanted to create a drink anyone can make. That’s also what I am looking for when I am in a bar. I am half French and half Spanish and the name for my cocktail came after brainstorming with my Spanish family on WhatsApp. My mum suggested the name Sencilla, which in Spanish has a double meaning: simple or easy, but also to enjoy pleasures and just chill.

The bar you dream of
My dream bar would be in Paris but influenced by the Spanish culture and lifestyle. A place where everyone is welcome… poor, rich, young or old, just like a Spanish vermuteria where people come to share a drink. It would be an easy place, not too expensive, where you could share a cocktail, wine beer or sherry, with some tapas (croquettas, Pata Negra etc) for around 40 people. The music would be a mix of flamenco and reggaeton like Rosalia, I love her.

What do you do in your time off
I used to go to bars a lot, but now I prefer restaurants. I also try to regularly take time to visit my family in France and Spain.

The spirit you like the most
Right now I am into rum because it’s the base of a lot of simple, classic cocktails. It’s very universal. Of course, Spanish rums like Bacardi, are my favourite and especially in a cocktail, because it’s more subtle than an Agricole rum, for instance.

What makes a good cocktail
Regarding my personal taste, I would say simplicity and balance.

What ingredient do you enjoy using in cocktails
I think it would be sherry, as I am Spanish. Sherry is like a cocktail, it’s complex, with a beginning and an end. For cocktails I like to use fino sherry to dry them. Fino sherry is the magic ingredient most bartenders.

Where do you think we need to go to interview another bartender
In Barcelona, go to Creps al Born, which is my favourite bar in the world and talk to Silvia, she is amazing. And of course, Sara at Le Syndicat, because it is thanks to her I am doing Bacardi Legacy.