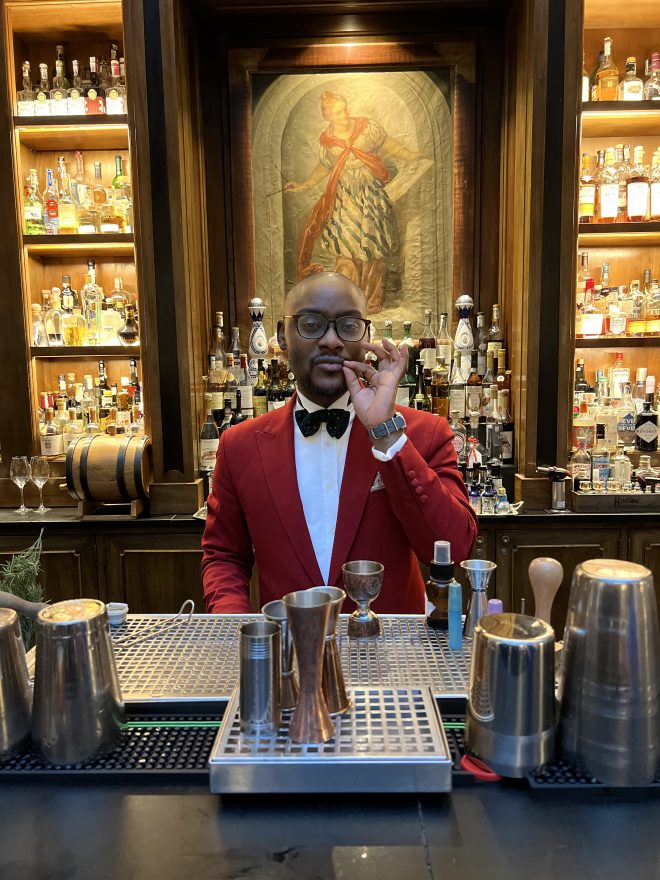 Keith Motsi is the Beverage Director at Virtù at the Four Seasons in Tokyo. He makes us two cocktails, one with Rum and Campari and the second with Calvados and Absinthe

Keith introduce yourself
I am born in Harare, Zimbabwe and raised in The United Kingdom. In 2017, while I was in Bermuda for America’s Cup, Asian spirits distribution and bar consultancy behemoth Proof & Company reached out with an offer I couldn’t refuse. So I moved to the upcoming bar at The Four Seasons in Beijing. From working at bars in the UK to being immersed in the heart of Asia, there were undoubtedly vast differences – from work culture to ethics and expectations. For me, things are a bit more refined here, and there is still a certain glamour about the hotels etc. In the west, hotels have somewhat lost some of the charm and magic usually associated with such places. In terms of creativity, I feel the bars and restaurants here have now overtaken the west in pushing the boundaries. Expectations are extremely high here, so you always have to be the trendsetter and not just be a follower. Then my next step was a big one. When Lorenzo Antinori was moving to Hong Kong, I was offered his role at the Charles H Bar at The Four Seasons in Seoul. This was an exciting proposition as things in Seoul were beginning to pick up. It’s worth mentioning that both Beijing and Seoul have very different drinking cultures and here’s why the way the cities are designed means the way one goes around makes a massive difference. Seoul is a sprawling megapolis & Beijing is a bit more of a compact megapolis. It is hard to hit a few different Bars/Clubs etc on the same night here in Seoul whereas in Beijing you could do a lot of Bar hopping. How cities are built and structured have a huge role to play in how its people consume culture and nightlife, and this is likely one of the main factors that define the kind of bars that dominate certain cities and certain districts in these cities. Steeped in Victorian-era mood, Charles H is a patchwork of prohibition-era New York speakeasy vibes and rich and moody styles borrowed from Korea’s Imperial family. We had our identity and concept which we always look back to for inspiration. We try to blend the past, the present, and the future and are always looking beyond our borders to see what techniques/methods all our peers are using around the world. The menu at Charles H takes Seoul through the new golden age of drinking, featuring classic cocktails and a selection of specials inspired by the travels of Charles H. using carefully selected high-quality products and artisanal spirits. Now I am starting my new role for a few months in Tokyo, still in Four Seasons, at Virtù

The bar you dream of
Something the size of Bar Termini– Me on the counter, Serving just Coffee, Champagne, and Tiny Bites, with a vintage Record player. In one corner my Mother talking to the ears of the patrons. My Father with a newspaper on the small outside Patio & telling bad dad jokes. Just a small neighbourhood concept that doesn’t have a set opening or closing time but is just done to spend time connecting the communities within the town radius. But honestly, probably just a neighbourhood spot that just does everything supremely well, with a certain elegance, charm, and atmosphere & with no pressure to please anyone from outside the town/village etc.

What do you do in your time off
Explore: Bars, Cultural Norms, Restaurants, Cities, Markets, Galleries, Hotels, People- One of the joys of living away from home is boredom never lasts long, There are always some new things to be explored & I feel very lucky & blessed to be in a position that I get invited to bartend & travel to different parts of the world. This industry has given me so much & I am forever grateful.

The spirit you like the most
Champagne or Cognac, I love grapes in general. Over time I have realised that what I am most of the things I am fond of in regards to food & drink, the common denominator is grapes.

What makes a good cocktail
Good Balance pays the bills- The art of balancing is something that should not be underestimated, not just in drinks/cocktails but in the way we carry ourselves in general. But if it was just something tangible in a way I would say skip the cocktails & go straight to the KRUG 🙂

What ingredient do you enjoy using in cocktail
Ice: Probably to Bartenders what FIRE is to chefs. Such an underrated ingredient that could make or break any cocktail. Just dilution in general is something that intrigues me. There are so many subtle ways that can make a huge impact on flavour that we in the industry can explore more.

Where do you think we need to go to interview another bartender
I enjoyed meeting Sly from HERO-Nairobi & the whole gang. They just had such a great presence & would like to hear more about what they are doing in Africa, That for me is the next frontier (If it isn’t already). We don’t see so much spotlight on the wonderful things happening there so please give them the MIC, We want to hear more.