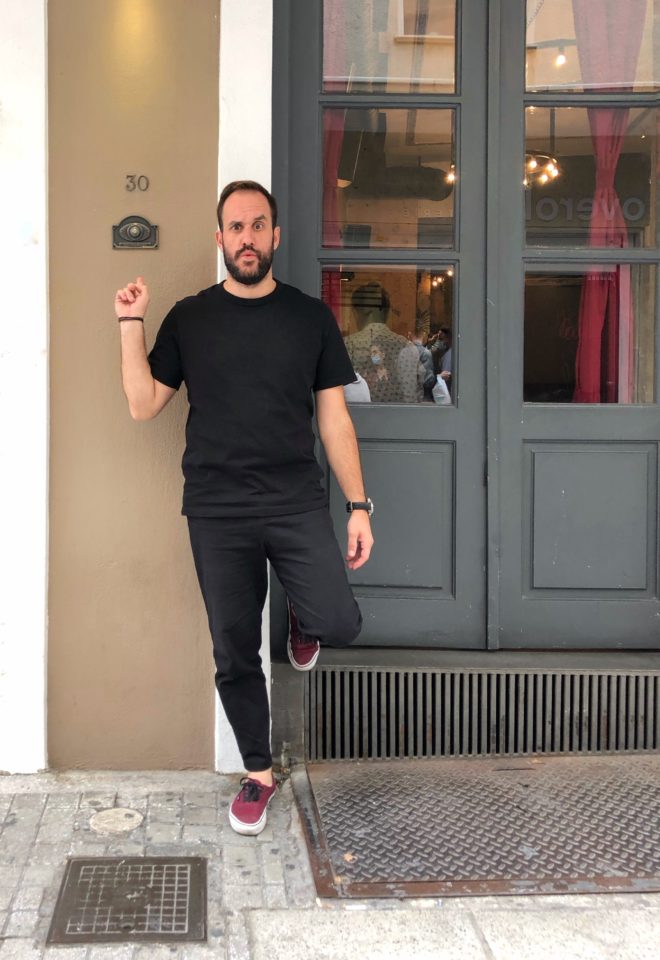 Nikos Bakoulis is the co-owner of The Clumsies in Athens. He makes us two cocktails, one with Gin and Sherry the second with Cognac and Verjus.

Nikos introduce yourself
I am Nikos Bakoulis, I am 33 years old and next year it will be my 20th anniversary in the F&B industry. I started as a waiter at a traditional Greek restaurant in my hometown. At 18 I moved to Thessaloniki to study economy and help myself to understand the business side of restaurants and bars. When I was 23 years old I became a partner in a bar called Spitaki and understood that this was my dream job, so I invested all my time and money into it. In 2011 I won the Worldclass in Greece and continued to take part in many competitions. In 2013, I decided to move to Athens where the cocktail scene was more mature and met Vasilis at Gin Joint. We worked there together for nearly two years and at the same time started to take pastry classes, so we could rethink and reimagine the way to make cocktails. For us the sugar levels in drinks are key (just like in pastries) and it allowed us to think differently about garnishes too. We also thought about the environment for the bartenders and that’s how we started to think about The Clumsies, how we wanted to work, prepare the drink’s and the bartender program. The name come from the fact that when we started the bar, most of the bartenders were super formal behind the counter so it was not at all relaxing. You can be a little clumsy and it doesn’t matter, because ultimately people are here to have fun.

The bar you dream of
My dream bar would be a place where I can work barefoot, in relaxing clothes and you can only drink caipirinhas. Somewhere on a small greek island, just a few hours from Athens. It would consist of a bar, a small taverna with a garden (so all the herbs, fruits and vegetables would be grown on site) and ask people if they prefer meat or fish to cooked for them in a simple way. They’d be a few rooms too in case people wanted to stay. That’s where I come from, my father is a farmer and he produces everything himself, so I’d love to have a place where I could do that too.

What do you do in your time off
I love wine. When I was twenty I worked in a restaurant with a huge focus on wine and it’s been my passion ever since. I collect wines from Greece, North of France, Argentina and New Zealand and I probably have around 800 bottles at the moment. I like the whole process, so when I can I go to the harvests in Crete and Santorini where the wine is great. I know a lot of wine producers and people in this industry. Otherwise, I run long distance as it helps to clear my mind and focus.

The spirit you like the most
I guess whisky and particularly scotch whisky. I love to mix different whiskies together so in the end, it creates a cocktail in itself, balanced, but with different layers. I enjoy a Rob Roy or an Old Fashioned which are complex and easy to sip.

What makes a good cocktail
For me just the cocktail you want to drink at a specific moment, as long as it’s balanced with good ingredients. We are blessed in Greece because most of the fruits or vegetables are very tasty. Erik Lorincz used to say that his Green Park is always tastes better in Greece because of the beautiful basil. That’s why when we travel around the world we take all the ingredients from here to get the right flavour. Imagine we want to make tomato water and we are in London, it would be tasteless if we didn’t bring the tomatoes ourselves. So these three things make a good cocktail for me: the moment, balance and great ingredients.

What ingredient do you enjoy using in cocktails
One of my favourite ingredients is carob because it can create totally different tastes. For instance carob honey is full of cacao and chocolate flavour, so it’s good in an Old Fashioned. If you take it from the tree and dry it, when you break it smells like parmesan cheese.  If you grind it and brew it will be like coffee. Macerate it and use it as flour and it’s taste like bread. It’s one ingredient that creates at least three different flavour profiles and we can find it easily as it’s grown in Crete.

Where do you think we need to go to interview another bartender
You should visit one of my favourite people on the planet, not only for his bartending talent but because he’s an amazing person, it’s Tato from Floria Atlantico in Buenos Aires. I am always happy to share a good glass of wine with this man. There is also a French guy, Jean from Alquimico in Cartagena you have to meet. His life story is mental. He left France for Colombia 15 years ago and started there from zero. He launched an amazing program from the farm to the bar and now it’s one of the most successful bars in the country and they produce everything themselves. Erik Lorincz was our first guest at the Clumsies, so go and visit him at Kwant. And interview a close friend of mine, Kostas, who is the Bar Manager of Schumman’s in Munich. He is a legend there, everybody knows him.