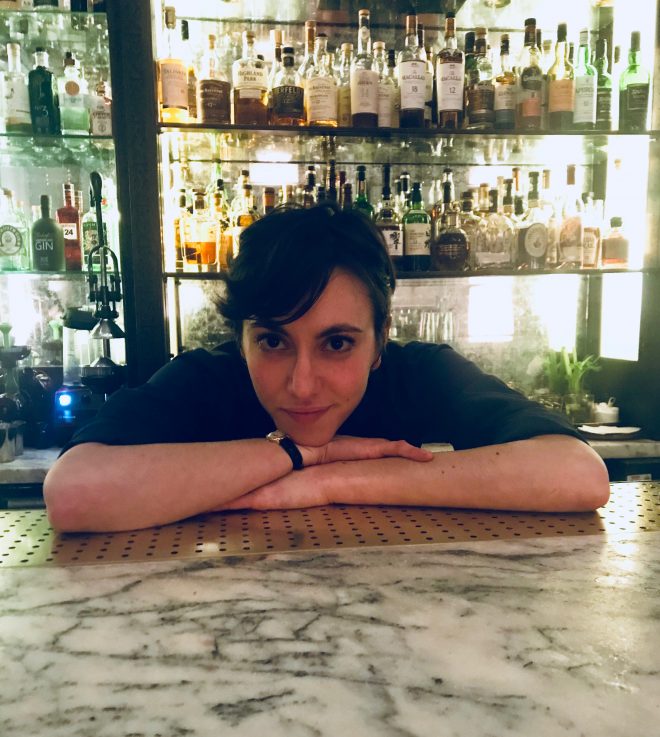 Keila Urzaiz de Calignon is a bartender at Artesian Bar at The Langham Hotel, in London. She makes two cocktails for us, one with Vodka and Cold Brue Coffee and the second with Gin and Verjus.

Keila introduce yourself
I am Keila Urzaiz de Calignon originaly from Spain, even if my mum is half french, so I speak the both langages. I studied dance at the Conservatory in Madrid to become a balerina, my goal since I was ten years old. After the Conservatory I continue to high level class to become a ballet teatcher for four years. I left to London in 2012 and find a job in Soho, as a waitress, thanks to my lovely smile, said the first guy who hired me despite my english. I hated it because I didn’t feel comfortable with the langage. They had a great bar team at this place, then I ask to move to the barback position to learn the job, but they told me a girl can’t do it. So I quit and after a short experience in another bar, I joined Blind Pig, one of the new place to be at this time. It was all about creativity. But it was so much pressure that after 6 months I went to Hakwsmoor, which won a price as best company to work in UK. They really deserved it. There, they were focusing on technic and I really improved my efficiency. After 2 years, I met Remy and Emilio from Little Red Door who came to Callooh Callay for their new menu. They were looking for someone in Paris, so I decided to leave my comfort zone at Hawksmoore and join the Little Red Door team for a year and half. I loved this place, but I really dislike Paris as a city so I had to move back to London. At the same time, Remy Savage was living too, to become the new head bartender at Artesian and he proposed me to join the team. Now I am exited because we are going to release a new menu in May.

The bar you dream of
My dream bar won’t be a big place, like for 60 persons max. A bar with a fireplace, cosy for winter, but with big windows that you can open when spring is coming. Nothing pretentious, very simple serve but efficient on visual. It would be in Spain, so much easier to create there something that has not been done before, compare to London.

What do you do in your time off
I stay with my cat watching movies and series, smoking cigarets and drinking hot chocolate at the same time.

The spirit you like the most
Gin because for me it’s the most challenging to create something original. I don’t know a lot about gin, so it’s more my instinct, which is a kind of handicape. So I have to try different gins to check which one matches the best with what I have in mind.

What makes a good cocktail
Balance of course, esthetic and flavour profile. Those three components have to make sens.

What ingredient do you enjoy using in cocktails
I love using verjus, because it brings a balance, but not in a strong way like lemon. The flavour is different too and make the drink round and clear.

Where do you think we need to go to interview another bartender
You need to interview Sarah who works with me, here she has a lot to say.  Johnny Munoz at Hawksmoor Spitalfields to have some fun. Go to Singapore to interview Joe Schofield from Tippling Club, seems a clever guy.