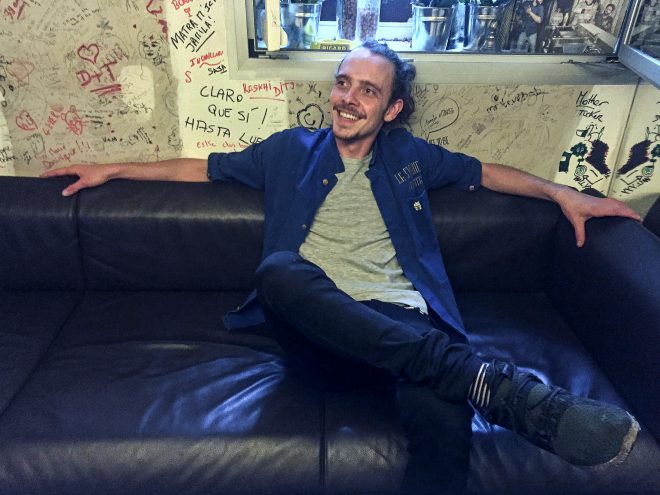 Aristotelis is bar manager at Le Syndicat, Paris. He makes two cocktails for us, one with french Whisky and Sauvignon, and the second with Calvados and Bonal.

Aris introduce yourself
I’m Aristotelis but everyone calls me Aris and I’m from Larissa, a small city in the centre of Greece. I actually studied computer science and only worked in bars in the evenings to make money, but when I finished my studies I knew I wanted to work in hospitality. I started working no the floor in a bar and that’s where I truly became interested in cocktails. I had to leave to do my compulsory army training and when I returned I began working behind the bar. That’s where I met Sullivan Doh from Paris, who had been invited by my boss to do a guest bartending stint at our bar. He stayed at my home for the week and you could say it was love at first sight. I visited him in Paris and knew this was the city that I wanted to live and work in. Sullivan called me three months later and told me about his plans for Le Syndicat and that was it. I’ve been here ever since and I am now the manager of this place.

The bar or party you dream of
The bar of my dreams would be a proper beach cocktail bar on a quiet beach, on a Greek island.Hammocks, chillout music, local seafood and quality cocktails using local ingredients for flavour and authenticity.

During the day I love to walk. I put on my music and just think about new ideas while I wander the streets. In the evening I like to go for cocktails with friends to places like Gravity, Little Red Door and Calbar. There are so many great bars to go to in Paris.

The spirit you like the most
Before I arrived here it was rum, but now after working at Le Syndicat I would have to say it would be a good brandy. It has a fantastic flavour profile with notes of chocolate, vanilla and coffee that work well with other ingredients.

What makes a good cocktail and which product do you want to highlight at this moment
A good cocktail depends on the person who is making it. I think the energy and mood of the bartender really affects the drink.

I really like working with vegetables. At the moment I am working on a cocktail using pumpkin, which I hope to have ready for the next menu.

Where do you think we need to go to interview another bartender?
You have to go to The Trap in Athens and interview Stephanos Draganidakis