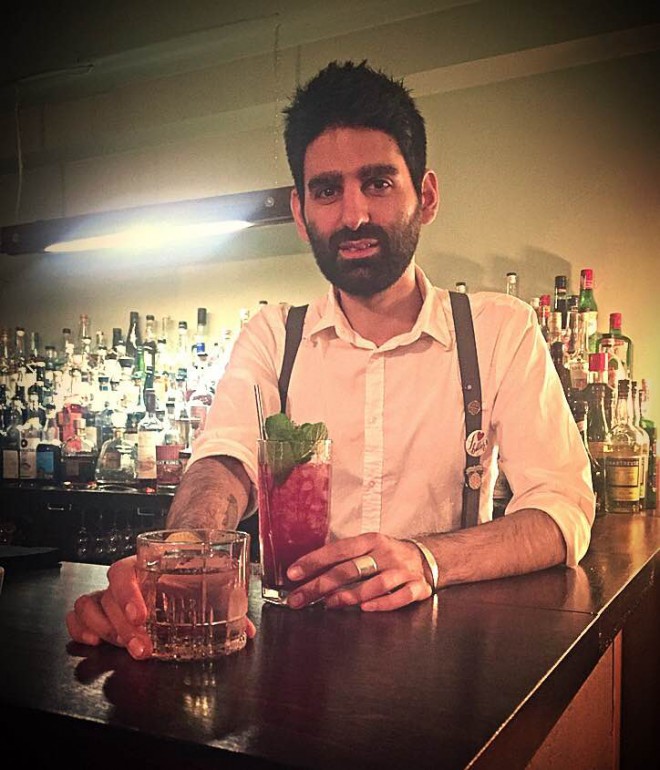 Joseph, is the founder of Mabel in Paris. He makes two cocktails for us, the first with cuban rum and fino sherry and his second combines port infused with pandan and homemade sherbet.

Joseph introduce yourself
I’m Joseph Akhavan, the founder of Mabel in Paris. I am 35 years old, I was born in Brighton, UK and grew up in Paris. I started seriously in the bartending scene quite late. Firstly I got my masters in literature translation and soon began a job as a translator, where I realised it was not very exiting and I had no passion for this type of work. So I thought to myself, I love hospitality but I was not inspired by the products used in most pubs I had worked in. I could see that there was different styles and levels for restaurants, from fast food to fine dining, so why should it not be the same with bars? I did loads of research on the internet and applied to work at Experimental Cocktail Club, they weren’t hiring at the time, but they shared my resume with Mama Shelter in Paris and I started there in 2008. I stayed with them for 2 years, then I worked as head bartender at La Conserverie. When I began there I won the Nikka Perfect Serve which was an amazing time for me as I got to go to Japan and explore the bars and Nikka Distillery. I already knew the style of bars in New York, London and Europe, but Japan was totally different. Everything is about the service, the details, even the ice… it’s all about the details. It takes a lot of time to become a bartender, first you are a bar back for a very long time before being allowed to make cocktails. In a lot of ways I’ve been influenced by the Japanese style of service. After 2 years in La Conserverie I left to set up my own business with my partner Samantha and we opened Mabel just over a year ago.

The bar or party you dream of
Mabel is our dream. First, it’s about the neighborhood. We’ve lived here for the last 8 years and it was important for us to be in the Montorgueil area. Second, we wanted something more than a cocktail bar, a concept that could be open during the day as well. In the beginning we had several ideas, including a shop or a patisserie… then we decided to open a grilled cheese shop as Samantha cooks them all the time at home and it’s part of her culture. There are also no grilled cheese shops in Paris, as it’s more about burgers or tacos. So the challenge for us was to find a space with two separate areas. One for the shop and one for the bar. Third, I wanted it to be about cocktails and rum which is why it’s called Mabel, Cocktail Den & Rum Empire. It’s not a tiki bar, we highlight rum in a different way. It’s a small bar with 6 seats at the bar and seating for 40. It has no different floors or hidden rooms, so everyone can see us and we can be dedicated to our clients all the time. It’s not usual in Paris, but our policy is sitting only, so it’s not packed and we can deliver a sharp service, that’s fundamental for us. We designed the interior ourselves, it’s warm and cosy, the color palette is a mix of brown and soft green, with a touch of wallpaper and copper. The lights can be moved to enhance the copper tones and we reduce the light during the evening. The bar has been designed especially for us. In the front of the station, on the bar, there is an ice bucket where I leave my mixing glass, so it stays at 0 C° and it’s better to control the dilution so the stirred cocktails are better. The facing steps are very common in Japan which I think are elegant and contrary to many bars I don’t like racks behind me. Regarding music, we have different playlists which evolve during the night.

When we go out after service on the weekend, we tend to go to the Experimental Cocktail Club. They finish after us, they are close, friendly, we’ve known them for ages and of course make good cocktails. Another place we like to go to eat and have good drinks is l’Entrée des Artistes in Pigalle.

The spirit you like the most
My favorite spirit is rum. I knew nothing about rum before I started weekly training sessions on spirits at Mama Shelter. There I discovered rum with products I’d never heard of before. What I like with rum is it’s diversity. In cocktails, you can mix with different spirits to make them more round or only use rum to make a drink more heavy and complex.

What makes a good cocktail and which product do you want to highlight at this moment
For me the definition of a good cocktail is all about balance. I can drink a cocktail and even if I may not like the ingredients used in it, if it’s well balanced I can appreciate it.

I love sherries. Sherry is divided into several categories just like rum. They can be dry, acid, sweet etc, so it gives another profile to a cocktail.

Where do you think we need to go to interview another bartender?
You have to go to Mace to visit Nico de Soto and Amor Y Amargo in New York.