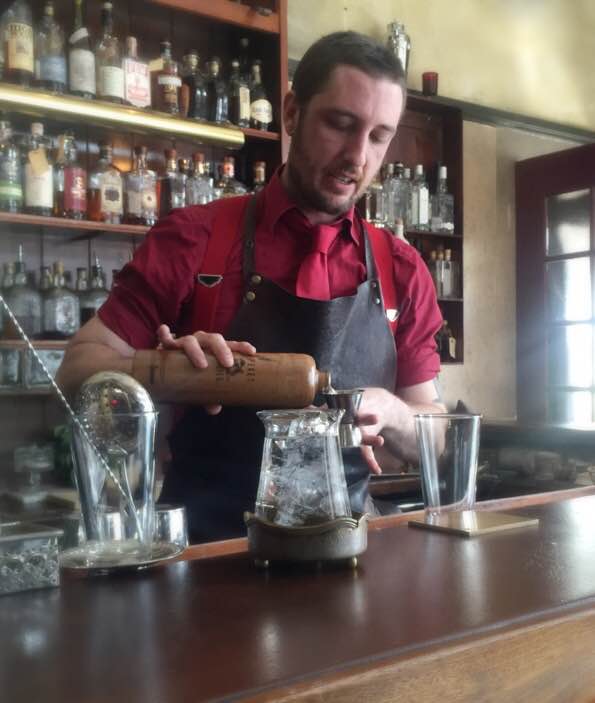 Michael Shone, is bartender at Salon 39 in Copenhagen. He makes two cocktails for us, one with rum and curacao, and the second is with genever and leek.

Michael introduce yourself
I’m Michael Shone, I’m from New Zealand and I’m a bartender here at Salon 39 in Copenhagen. I think the reason I became a bartender is because I’m an adrenalin junky and unlike a chef where you tend to be hidden away, a bartender is on show and the guests can see everything you do, every night. I originally studied communications in New Zealand and worked part-time in bars and kitchens until I graduated and became a journalist. When I arrived in Copenhagen, I didn’t speak Danish, so I started to work in bars again and I haven’t looked back. I love this industry and I love the people in it.

The bar or party you dream of
I’d like to open an unpretentious, good local bar here in Copenhagen that was open super late. It would be intimate, maybe in an old house that could pack around 40-50 people. It would have a nordic look, but the ambiance of a dive bar serving really sharp cocktails that used locally sourced produce. I think food is important when you are drinking and as it’s hard to find places to eat here late at night, I would offer one thing done perfectly, like a great burger.

When I have spare time I go to other bars to visit people and see what other bars are doing in the city. I often go to the Barking Dog because I live near there and know all the guys. It’s a really casual place, but the drinks are mad sharp. I also go to other great bars in Copenhagen like Ruby, Lidkoeb and Duck and Cover, but after a long shift I tend to just head to a Bodega or dive bar for a shot of Fernet, a beer and to smoke a million cigarettes.

The spirit you like the most
Now that I’m here in this bar, I’d say American Whiskies. Bourbon is either good, great or shit. It’s easy to judge and great to use in cocktails.

Since moving here I have loved using local produce, I just don’t want to be importing stuff from Australia and other places miles away. We are about to launch a new menu here, using local, seasonal produce and one of the drinks i am making for you uses leeks. One day I was at home making a classic Danish leek soup and as I cut the fresh leeks I got this hit of fresh grass notes on my nose. It was fresh and pungent and I wanted to use it in a cocktail. I hope people will be intrigued enough to try it, because it’s so nice. I blitz the green parts of the leeks, strain them immediately and add it to a lime cordial I’ve made. It’s great.

Where do you think we need to go to interview another bartender?
I know you guys have run out of time, but next time you are here you have to go check out the Dog (Barking Dog), I’m so sad you guys didn’t get to meet them, it’s fucking fantastic!