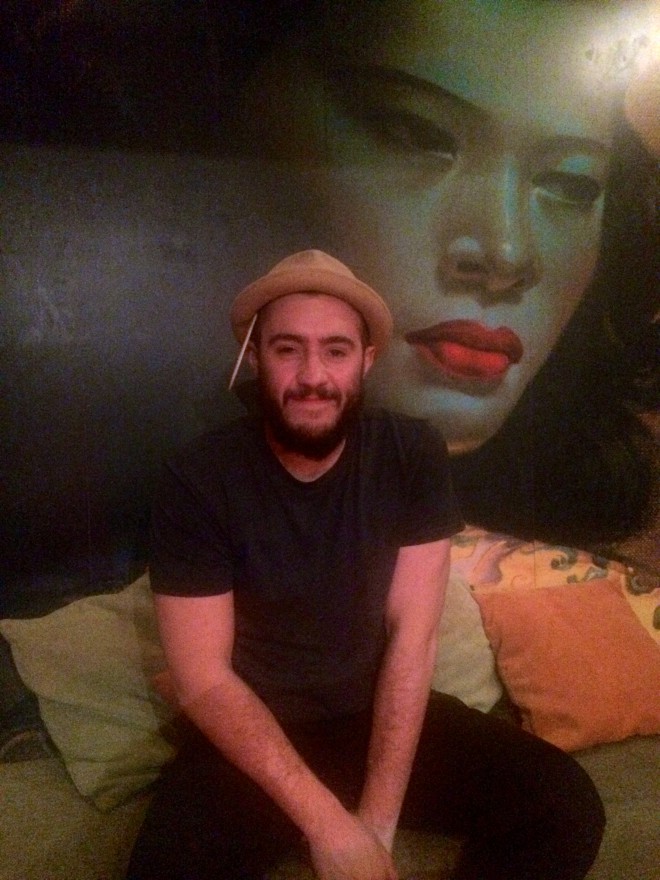 Nikolas is a bartender at Trailer Hapiness, London. He shows us two cocktails, one is mezcal and apricot liqueur based and the other one uses coconut tequila and rum.

Nikolas introduce yourself
Hi I’m Nikolas, but most people call me Nick the Greek. I’m a bartender at Trailer Hapiness in London, which is a classic tiki bar. Becoming a bartender is a hard job, it’s very demanding. You work long days and it’s physical work, especially in a tiki bar like this one. But seeing the smiles on my customers faces on a Saturday night makes it all worth it… it’s what I really love and it’s not about money. I remember I began working in the south of France, my french was terrible and I became a hostel bartender to survive. In the end, you are the cool guy behind the bar, selling cheap booze having lots of fun and parties with loads of travellers. Then it became more serious when I moved to Melbourne. I joined the 1806 with 72 traditionnal classics on the menu, like Manhattans, Negronis and Espresso Martinis…. The place is an old theatre with a soul, and it”s a place to learn how to make delicious drinks and understand what creates real balance in a cocktail.

The bar or party you dream of
Where I come from, Cambridge, there is a bar in a church and I love that. The idea is to get a chapel and the bar will be a half moon crescent shape between the two pillars where the priest stands on a Sunday. Above the bar would be an upside down blue neon cross. It’s not a provocation, it’s more a design installation that you admire above the bar. I would have
individual tables for two people and larger sofas. A big, long church with incredible acoustics for a crazy sound system with enough space so the waiters and waitresses can move easily with their tray to serve delicious cocktails.
As I am Greek and a Brit I also love to go to the pub to drink a beer or have a shot when I party. If I really want a delicious drink I go to Happiness Forgets, I love that place and in my opinion they make one of the best Negronis in London.
More generally I love places that you don’t know are bars, like a hidden speakeasy in New York or moonshine places.
It could be the bartenders or the atmosphere, for example last night I was at the Beaufort in the Savoy hotel for the first time and it was amazing. At the end it’s the character of a bar.

The spirit you like the most
As a bartender I love any spirits and I used to be a whisky and scotch man. But here it’s about rum and I understood that I knew nothing about it before coming here. You can do so many things, it’s so vast and from so many different countries like Cuba or Jamaica. There are different types of rum to try too: from white to brown and agricole. As I have a classic background I love to make an Old Fashioned with Navy Pusser’s rum or for a more dry version use a plantation rum. When there is coconut rum in a Pina Colada, you just want to be on a beach and drink it the whole day. Unfortunately rum has a bad image because of Bacardi or drinks like rum and coke, but we try to change that here.

What makes a good cocktail and which product do you want to highlight at this moment
Balance is the obvious answer. Being in London means there are a lot of bartenders who can make a good cocktail, but it’s about having the right cocktail for the right moment at the right time which can make it ‘the one’. It’s about psychology at the end. As well it’s a drink that has something which makes me want to touch the glass, smell it, feel it and ultimately taste it.
Even if it’s not supposed to be a spirit, I would like to highlight mezcal to add to cocktails. The smoky taste, followed by grassy notes that come later, I like that addition in a cocktail… when the taste changes in your mouth. Most of the time clients don’t know where this taste come from, and I love that, the final ingredient which gives a drink a twist.

Where do you think we need to go to interview another bartender?
There are a lot of bars, but one of my favourites is the Shady Pine in Sydney, with its saloon style. You enter, it’s dark and you don’t really know what to expect, like here in Trailer. Otherwise the Bar Americano in Melbourne, it’s very small with only a ten person capacity, so on a Saturday night there are no seats.