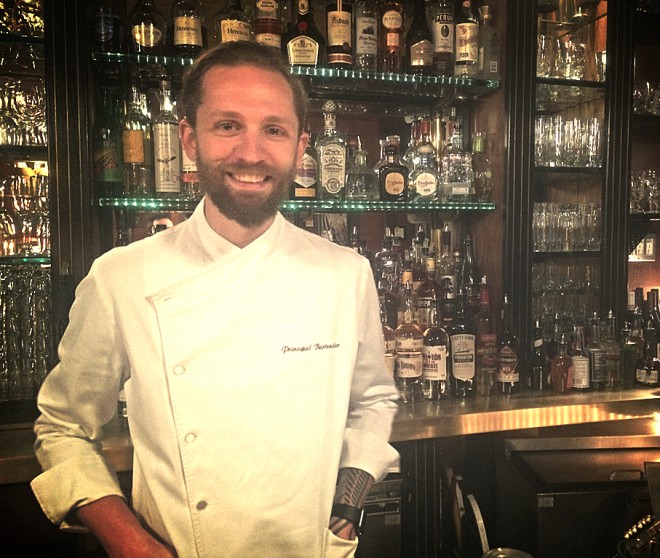 Steve Schneider, is the principal bartender at Employees Only in the West Village, New York. He makes two cocktails for us, one is with rye whisky and Cocchi Torino, and the second is with mezcal and honey.

Steve introduce yourself
I’m Steve Schneider, principal bartender at Employees Only in New York. I have been a bartender here for over 7 years and been in the industry for the past 13. I was originally in the United States Marines, but after an injury that nearly killed me, followed by 3 years recovering, I discovered being behind the bar was the only thing that made me happy. Being happy was my first step in recovery and my main goal in life. It could have been anything that did it, but for me, it was being behind a bar and interacting with guests and the team aspect is important for me as well. It all began with speed bartending competitions in Washington DC and I was winning a lot of them and making good money, that was in the early days of the new wave of cocktails in New York. Then I met a bartender who took me under his wing and showed me bartending could be something else. He allowed me to extend my skills, from flair and cocktail making to molecular techniques. In the end for me it’s still about speed, accuracy and finesse in this industry. Good stuff in a glass and nothing too crazy. I’ve worked at Employees Only for 7 and a half years now, and I love the energy here. You can dance along the bar, use your body and mix 4 or 5 cocktails at once for your clients. All the team has been here for a long time and in 11 years I only know a few bartenders who have left this place. It was launched by bartenders from Soho and was one of the first speakeasy style bars here in New York. The idea was to create a place for people who work in the hospitality industry, as most bars close around midnight or 2am, we close at 4am. The owners of Employees Only are leaders, they support the team both at work and personally as well. We try to do the same with the next generation to take our team to the next level. We’re open 10 hours a day and in 2015 we served 190,000 cocktails… that’s more or less one cocktail per minute.

The bar or party you dream of
Maybe the reason I haven’t opened my own bar yet is because here is exactly what I want. A large place for around hundred people, with a restaurant at the back and producing cocktails all day long. But, if it was my dream bar I’d probably have one more station, so 3 instead of 2. I’d also have more space to move and put the bottles, as opposed to here, where it’s bottles behind bottles. I like the idea that you can come to a place for several years and you have the same guys behind the bar, so you know what to expect.
When I have time to go out I like to go to see people who have visited me. I return the favour. All over the country and around the world I have bartender friends. It’s feels good to be able to find a great place anywhere in the world.

The spirit you like the most
That’s a difficult question to answer, because as the bar manager when I think about cocktails and oversee the menu I can’t just concentrate on one spirit. The menu defines who we are and how we’ve evolved as a bar. It’s not really about my taste and my spirit preference as I can’t focus on only one spirit for the menu.

What makes a good cocktail and which product do you want to highlight at this moment
For me, a good cocktail is the one the customer likes. I can imagine many people have told you that, but at the end it’s true, especially here in New York City. We have people who come for all around the world and live in the same block. How do you make you them all like your creation. There is no one size fits all. Otherwise, I am looking for a story to tell with a beginning, a middle and an end. When I create a drink, I create an idea.  When you taste a cocktail you can feel this idea with the first sip, the middle and the finish. You have to see if this story will be the one the client wants to “listen” to.
I like spicy drinks, it adds a third dimension to get that middle palate, I was talking about. It shouldn’t be too spicy or you’ll burn your mouth. So, the products I enjoy using are anything which add spiciness. For brandy it’s more about ginger and with mezcal or tequila chillis from the same region work well.

Where do you think we need to go to interview another bartender?
Here in New York, I’d just stay close by and go to Raines Law Room, they have great drinks and service. Other bars I like which have been around for a long time are: Pegu Club, PDT, and Attaboy for the best drinks in the city. In other places I’d go to Lost and Found, Cyprus, Broken Shaker, Miami, I really like those guys Titi and Christophe from Le Calbar in Paris and Trailer Happiness, London.