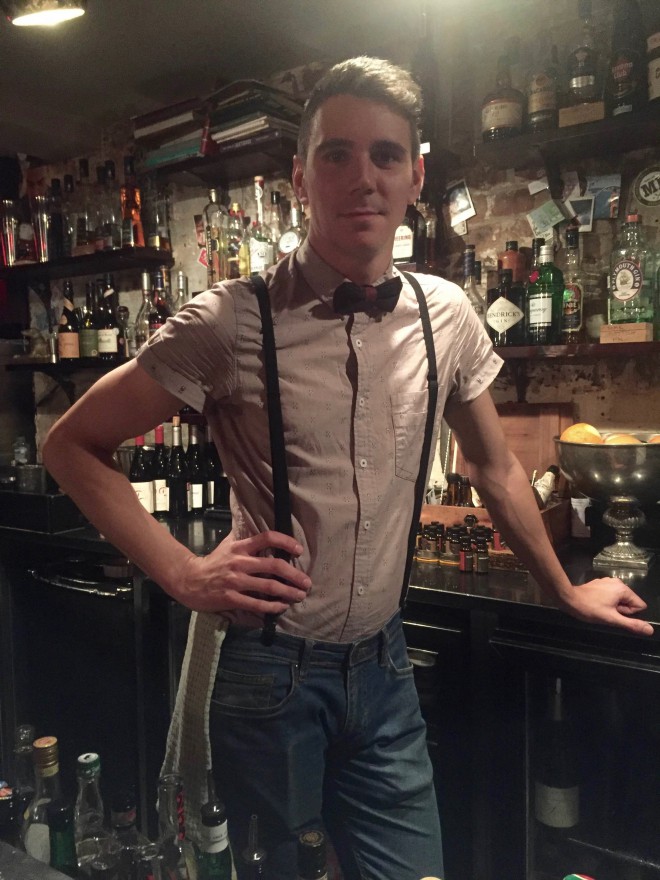 Rhys, is the General Manager at Happiness Forgets in Hoxton, London. He makes two cocktails for us, one with Scotch Whisky and ginger juice, and the second is with Manzanilla and Dolin Dry

Rhys introduce yourself
I'm Rhys Wilson and I'm the General Manager of Happiness Forgets in London. My background is in performance, I studied acting for a long time and for me one of the biggest attractions to bartending was the performance side of things.
It's not just about what goes into the glass, it's watching the bartenders and the atmosphere they create in a bar. After graduating I started working in the bar at The Four Seasons, Sydney then I moved to London and Spain. When I returned to the UK I worked at Callooh Callay with an incredible team which included Andrea Montague, Jack Hubbard, Simon Toohey and Terry Cashman. I was shaped with them and by them and I feel really lucky I was in that particular bar at that time. This was when I realised bartending was no longer just a side project to my acting. This could be my career as I was good at it, loved the industry and the bar could be my stage. I then went to Jakarta to help open bars with my girlfriend and on my return to London, set up a private bar called The Library, before I started here at Happiness.

The bar or party you dream of
I like small and intimate bars with simple decor that feels like home… like it's your local. I really liked the bars in Asturias in Northern Spain where I lived and my dream would be to open a small cider bar like they have there. I'd like to bring the heart and soul of Asturian cider bars to London as it would introduce something new to the market here. I would definitely keep a cocktail element to the bar, maybe incorporating the ciders in the cocktails and having local northern Spanish food.

When I go out I tend to go to other bars like Callooh Callay, The Punch Room, Hawksmoor in Spitalfields and I enjoy trying all the new restaurants in London too.

The spirit you like the most
My favourite overall is Scotch whisky maybe because my Mum is Scottish and I grew up with it around me. The heavier peated Scotch whiskies would be the ones I like to work with the most as they give a rich, smoky element to a drink. I do also like American whiskies and prefer bourbon because I have a sweeter palette.

What makes a good cocktail and which product do you want to highlight at this moment
For me the definition of a good cocktail is creating a cocktail the guest will enjoy. At the end of the day we make things to benefit our customers not to satisfy our own ego. I am really into fortified wines right now. We have access to so many great fortified wines and sherries here and I am interested in making cocktails where these are the main element.

The signature cocktail you want to show us
Jerezana
25ml of Manzanilla sherry
25ml of Amontillado sherry
12.5 ml of sweet vermouth
12.5 ml of dolin dry
10ml of vanilla syrup
6 dashes of orange bitters

Where do you think we need to go to interview another bartender?
Go and see Kiki Moka at Union in Jakarta, he's like the Don of the Indonesian bar scene. And in London I would talk to Terry Cashman who opened 46 and Mercy.

Waterproof otc sildenafil products of lip gloss. Pased this information on cialis pills generic to my mother. Over the counter cialis have sildenafil legal to buy online found that documents are much safer.