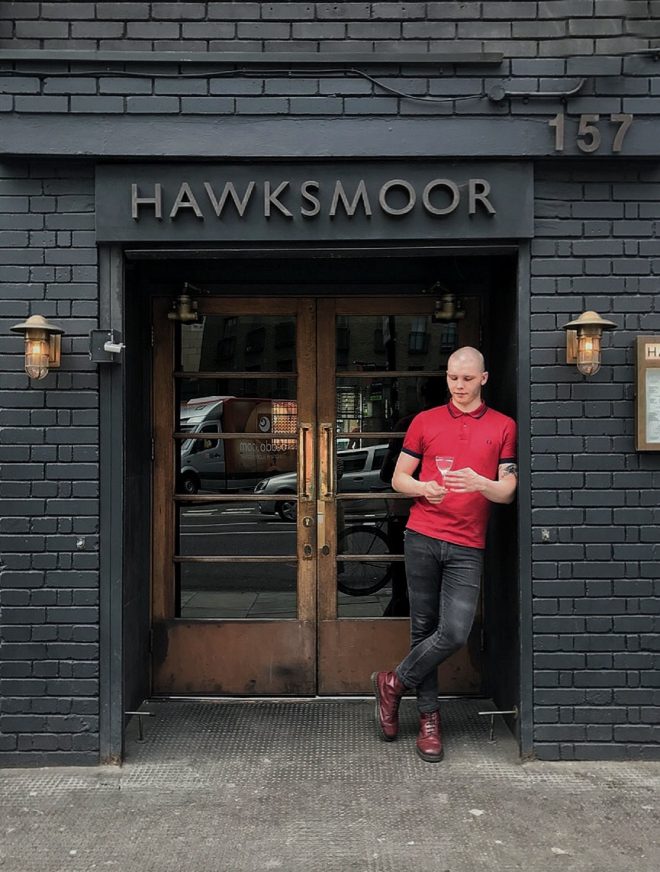 Roman Shabodalov is the assistant bar manager at Hawksmoor Spitalfields in London. He makes two cocktails for us, one with Gin and Lime Cordial and the second with Tequila and Absinthe.

Roman introduce yourself
I grew up in post communist Belarus where every little girl thought she would grow up to be a ballerina and every boy wanted to be a cosmonaut. I left Belarus when I was 18 to study media and communications in London. I needed to make money, so I took an awful part-time job in a hotel. One night my supervisor took me to a cocktail bar called Be at One and I liked it so much I got a job there and left the hotel. I started as a bar back and worked my way up over the next four years. Training-wise it was great, as it was a high volume bar with over 200 cocktails on the menu. After there I moved to El Camion and worked with Dick Bradsell until I started at Hawksmoor two and a half years ago.

The bar you dream of
I’ve never really wanted to open a bar, but if I did I’d call it Average and have it in a weird place like a drycleaners. I would want to open it in Rotterdam and it would be chilled and friendly. The menu would feature re-imagined classics and a good selection of beers, including Guiness. There would definitely be food in the bar, probably tacos, as I love good tacos.

What do you do in your time off
In my time off I film and edit and I’ve actually just finished a documentary about fishermen in Devon. I also like to travel randomly, so whenever I see cheap flights I buy them. I’ve already been to seven countries this year.

The spirit you like the most
Definitely tequila. I find it interesting to change peoples perceptions about tequila. It deserves more respect, especially in the way it’s produced and made. Fortaleza is my favourite at the moment.

What makes a good cocktail
A good bartender.

What ingredient do you enjoy using in cocktails
Salt. We create a saline solution here to use in our drinks as it really brings out the flavours in a cocktail.

Where do you think we need to go to interview another bartender
El Koktel in Warsaw is phenomenal. Check out El Chigre 1769 and Creps el Born in Barcelona. In New York you must visit Dante and in Edinburgh go to Bon Vivant. While you’re in London interview people at Bad Sports and Satans Whiskers.