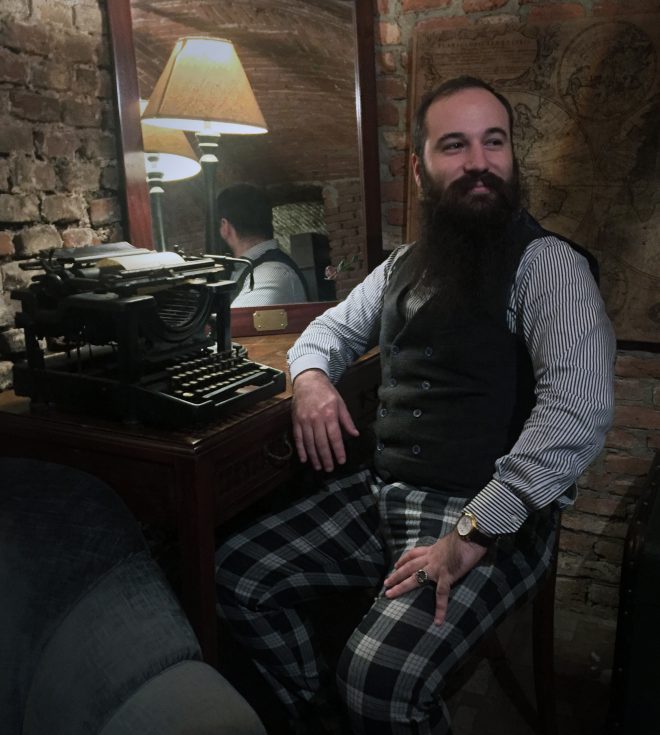 Fabio is the host of 1930 in Milan. He makes two cocktails for us, one with Rye Whiskey and Gum Syrup and the second with Bourbon and Saffron Syrup.

Fabio introduce yourself
My name is Fabio Cavagna aka Benjamin and I’m from Brescia in Italy. Six years ago I began studying philosophy in Milan and when I returned home on weekends I worked in a local pub. Around this time, while all my friends were drinking vodka shots, I tried whisky for the first time. I remember it was Laphroig and the combination of salt, wood and smoke had me hooked. My obsession with whisky began and my curious nature led me to many bars in Milan and I also started collecting whiskies from around the world. On one of my visits to a Milan bar I met Flavio from Mag Cafè and he told me about another bar in their group that I should visit. That’s when I discovered 1930 and fell in love. I drank two Ardbegs there and the next day went back to Mag to thank Flavio, but instead met his business partner Marco. A few months later they asked if I wanted to join Mag Cafè as a bar back and I said ‘yes’, gave up philosophy and moved to Milan. I worked there as the bar back for quite some time until Marco offered me a role at 1930. For me, I’m not a bartender… i am a host.

The bar or party you dream of
I do have a dream. The project is in my head and I’m sorry, but it’s a secret. The only thing I will tell you is it won’t be in Italy.

I have three passions: girls, whisky and Kraft Philadelphia cheese. I also enjoy wine and eating at friends restaurants.

The spirit you like the most
American Whisky. At this moment I prefer rye, because it’s classic. I love the history and the complexity and I think this makes it the king of the spirits.

What makes a good cocktail and which product do you want to highlight at this moment
Character. I also like to taste umami in a cocktail.

I would have to say gum syrup. It gives a drink an incredible texture. I think it’s a magical ingredient.

Where do you think we need to go to interview another bartender?
Baba au Rhum in Athens, Greece. Also, go and see Giorgio at The Coburg and Connaught Bar in the Connaught Hotel, London. Talk to the team at Mr Foggs in Mayfair, London and of course the guys at Mag Cafè in Milan, Italy.