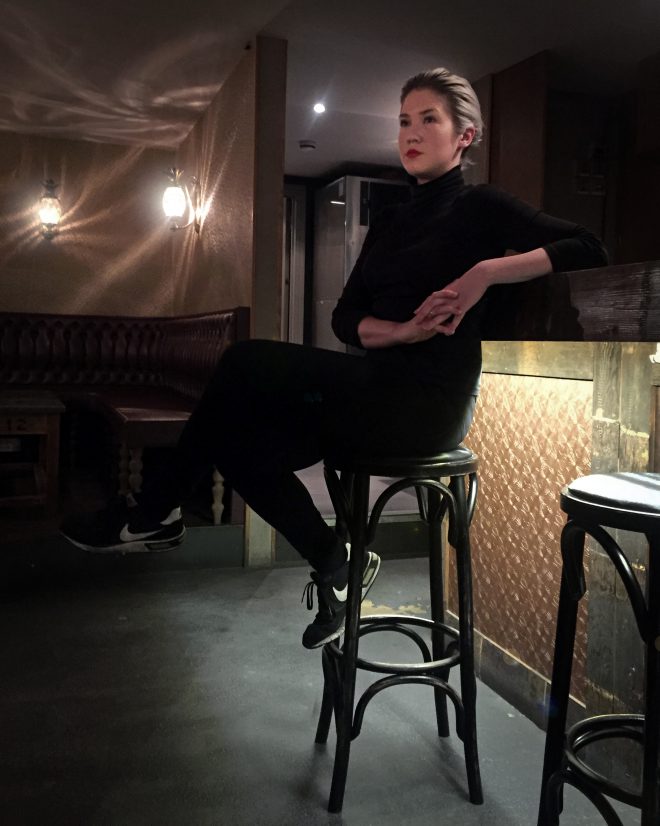 Tara is the General Manager of Original Sin in London. She makes two cocktails for us, one with Rye Whiskey and Maple Syrup and the second with Gin and Cynar.

Tara introduce yourself
I’m Tara Garnell from Original Sin in London and I can remember the exact moment I wanted to become a bartender. I was watching a film called Dinner Rush set in a New York City restaurant during a black out. The bartender puts on a miners’ hat and basically holds court in the darkened restaurant. I loved how he took control of a bad situation and completely changed the mood. I’ve been working in the industry for years, starting at Ping Pong as a bar back, until I progressed to Bar Supervisor. I then went to Freud in Covent Garden and Hakkasan after that. This is where I met Sacha Molodskikh who now runs Le Parfum in Monpellier. He is definitely one of the most precise and inspiring people I have ever met. When he left it was quite a blow and I started to think about moving on. In my free time I was spending time at Match and watching the way they worked. Eventually they asked me to do a trial shift and offered me the job, but also told me Milk and Honey wanted me to do a trial too. I went straight from Match to Milk and Honey and at midnight they offered me the job, which I accepted the next day. That’s where I really cut my teeth working with Tim Phillips in the Red Room. I decided to go to Argentina for three months and when I returned I helped with the opening of Hakkasan in Mayfair. During this period I also met Alastair Burgess from Happiness Forgets. I left Hakkasan and began working for Diffords Guide and used to take my laptop and work at Happiness, so it was like a second home. At this point I also began drinks styling, which I still do regularly when I am not in the bar. After Diffords I started working at Happiness Forgets, until Ali asked if I would be General Manager of his new bar, Original Sin in Stoke Newington and I’ve been here ever since.

The bar or party you dream of
It would be an amalgamation of various bars I’ve worked in. A small basement bar like Happiness, with a simple, concise cocktail menu. It would be dark and intimate with an l-shaped bar consisting of no more than two stations. I would definitely have eclectic music that would be adjusted accordingly to the mood of the customers. I would also have a small food offering, to keep people content at the bar.

As I am either at the bar or styling on shoots (Tara recently worked on the new Haig campaign featuring David Beckham), I tend to be quite time poor. If I do have some spare time I tend to go to Tin Café for my coffee and I enjoy cycling around East London. If I have a night off, I do generally spend it in bars as I love this industry. My favourite places are: Satans Whiskers, Peg + Patriot, Dandelyan, White Lyan, 69 Colebrook Row and of course Happiness Forgets will always hold a special place in my heart.

The spirit you like the most
I have so many wonderful memories associated with whisky, that go right back to the age of eight when a family friend used to bring Talisker back from Scotland for us all to try. To work with in cocktails I prefer Rye Whisky, because of the endless ingredients you can combine with it.

What makes a good cocktail and which product do you want to highlight at this moment
Balance, simplicity and temperature.

Sherry. I tend to gravitate towards Fino, as it’s like a velvet glove… it just effortlessly fits around a drink.

Where do you think we need to go to interview another bartender?

Josh or Joseph from Satans Whiskers, they are a dynamic duo and it’s a pleasure watching them work.

Check out Tara’s styling work on her instagram feed