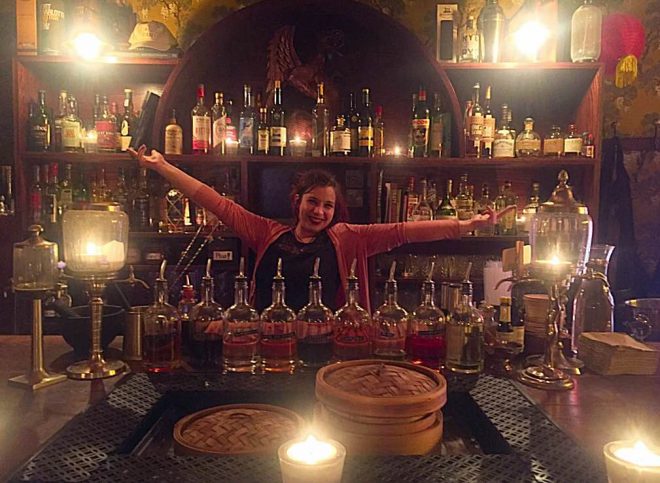 Sophia, is the head bartender of Peony at Opium Chinatown in London. She makes two cocktails for us, one with mezcal and rose, and the second is with rye whiskey and fig.

Sophia introduce yourself
I’m Sophia Urwin, I work at Peony in Opium Chinatown. I actually studied to be a make-up artist in Bournemouth and loved SFX and wig making, but I needed money whilst studying, so I worked at a student nightclub making traffic lights, wu wu’s and long island iced teas. When I started at 1812 in Bournemouth they told me to forget everything I had learnt about making cocktails and I realised when I was studying cocktail books during my make-up course that my passion actually lay there. After finishing my course, I moved to London to pursue a career in bars. I started at the York and Albany, moved around a bit and then went to Paris. Romain de Saussure said: “Hey baby love, you’ve got three months. You fuck it up, you go back to England.” So I started at Prescription Cocktail Club and a year later I moved to Ballroom, then Little Red Door. I moved back to Bournemouth to work at an awesome place called Larder House with James Fowler and eventually came back to London to work at ECC Chinatown. When I was told about this bar and that it was my own space, with my own menu, I couldn’t say no. I’ve put so much love and effort into this menu and the drinks, but in the end I find they are like Marmite… people either love them, or hate them.

The bar or party you dream of
It would be a party bar in Florianopolis, Brazil. All it would be is me serving behind the bar, a chef cooking outside, hammocks everywhere and party music. It would be like a block party everyday of the week.

I like to go home and I love to sleep. If I go out I tend to end up at El Camion, Casita or Loves.

If I had to choose a spirit, I’d probably say Mezcal as I try to add it to everything. I love the raw, natural, aggressive flavours. It’s heart and soul man.

The chat you have with a bartender. You can have the sweetest cocktail in the world, full of depth and complexity, but if the bartender is a freaking fester you won’t want to stay.

Teas, herbs and plants. At the moment I love nettle, eucalyptus and mint as they are great to make syrups from.

Where do you think we need to go to interview another bartender?
Honestly, I think you should go and interview Kelly Ballett from Lulu White in Paris. She is doing really awesome things.