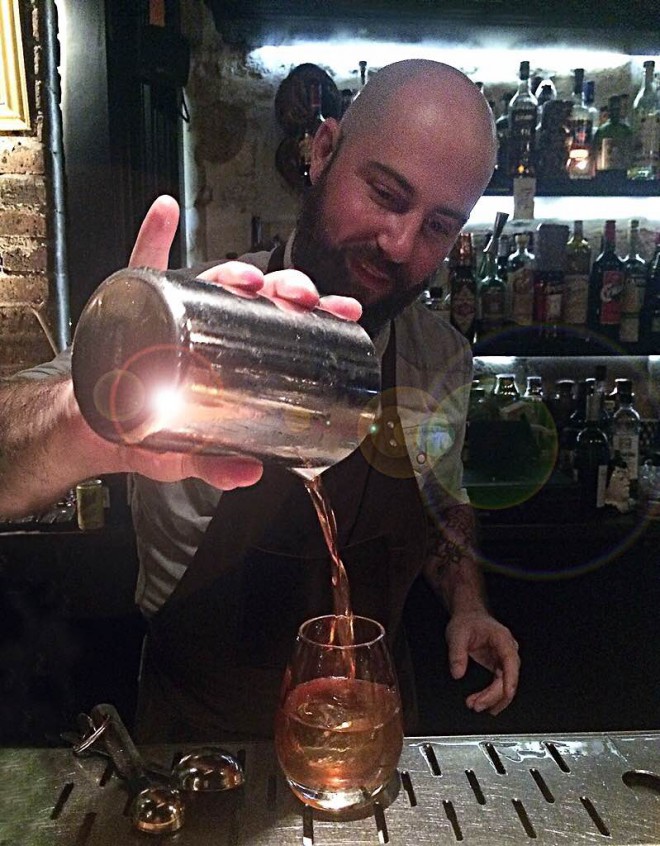 Bar is the co-founder of Imperial Craft in Tel Aviv. He makes us two cocktails, one with rum and pineapple and the other uses Bacardi and Martini.

Bar introduce yourself
Hi, I’m Bar Shira and I’m the co-founder of Imperial Craft cocktail bar in Tel Aviv. It’s a bar in a hotel called Imperial and together with Gilad and Dror we opened it 2 years ago. We also have a restaurant, La Otra, and soon we will be opening a new Imperial Craft bar in Jerusalem. I started bartending in 2001 because I liked interacting with people and it was easy money whilst I was a law student. In fact, I have a law degree but I am not practicing. I hated studying law even though my mum is a Judge and I knew you can’t be good at what you do if you don’t like it. I wanted a job that I loved and was passionate about. With cocktails, it’s not like pouring a beer, there is real craft, respect, dignity… and fun too. Bartenders have been fighting for the last 10-15 years to be able to do something other than pouring wine or shots and now good bartenders are considered equivalent to a chef. Now, at the top level of bartending the aim is to mix the fun with professionalism, like Sullivan from Le Syndicat. I think the way bars and bartending are moving is very Parisian actually. A lot of fun with good cocktails. Most of the time around the world you have classic bars with good cocktails or fun bars which are not focusing on the drinks. In Paris you can dance and have good cocktails at the same time. I think a lot of bars everywhere will now combine the two and follow the lead of Paris.

This interview was made during a guest bartending session at Little Red Door in Paris. So, it’s ‘little bit’ noisy and bumpy. But at least you can feel the ambiance and the fun (featuring Sullivan Doh).

The bar or party you dream of
With Imperial Craft, my dream came true. Everyone is passionate there and we take our guests on a journey of taste and experiences. When they close the door behind them, they are in a different world, like a bubble. There are bamboo chairs, bushes, Asian food and the kind of stuff to recreate the ambiance of an East Asian colonial hotel. It’s a small place where 35 people can fit and it’s seating only. Our idea is to make Tel Aviv a bar scene, even if it’s a small city in a small country. In Tel Aviv we live on the edge, it’s part of our life, you don’t know what tomorrow will look like, it can be sad and happy at the same time, so you have to adapt.
When I go out, I like restaurants with a good bar. I still like to have fun, but it’s no longer about partying like a noo-na.

The spirit you like the most
I like working with very strong spirits like mescal or smoky whisky, but I also love pisco, so everywhere I go, I try pisco based cocktails. It’s sweet, but interesting at the same time with a tasty distinctive flavour. It’s appealing to the palate. To be honest I love all spirits. Except vodka, because I don’t believe it adds any character to a drink.

What makes a good cocktail and which product do you want to highlight at this moment
After many years of bartending, I think I can describe my style. Simple drinks. I don’t like drinks with flowers from a far away mountain that no one can find. I don’t like homemade bitters with gold tincture made with a rock from the moon. I like simple ingredients that you can find everywhere. A good cocktail should be simple, quick to make and have strong flavours. Like the signature drink I’m going to make for you. It’s easy, uses simple ingredients and can be made in any bar on the planet.
I love to work with bitters and especially the ones from Dr Adam Elmegirab. The best for me are: boker, tea pot and dandelion. Good bitters have to be tasty on their own and his are. Bitters complete the drink, just 2 or 3 dashes and it changes the taste of a drink in a very good way.

This interview was made during a guest bartending session at Little Red Door in Paris. So, it’s ‘little bit’ noisy and bumpy. But at least you can feel the ambiance and the fun (featuring Sullivan Doh, Remy Savage and Vassilis Kyritsis ).

Where do you think we need to go to interview another bartender?
I think you should go to Cyprus as it’s very interesting right now with the guys from Lost and Found, they are really passionate. Also Kita Koguta in Warsaw. And I love the entire scene in Amsterdam like Door 74, Tales & spirits… all of them.

Thank you Little Red Door for the crazy night!!!